The largest RTC ever caught by hook & line in the wild, was smaller than this specimen raised in captivity in a zoo.

Overall, catfish are some of the most abundant species of fish in the world. According to Practical Fishkeeping, there are ... Read more7 Largest Catfish Ever Caught

According to a news report, Fernandes has over 100 IGFA world fishing records. Just a month before he made his record redtail catfish catch, Fernandes caught another redtail that was 113 pounds 8 ounces (51.5 kilograms).

Are their larger WC specimens that have been documented? I would love to see them.
He who dares not offend cannot be honest. - Thomas Paine
Reactions: twentyleagues

I have to disagree Neil,

www.fishing-worldrecords.com
I specifically remember this as Victor posted this link in response to something I said months ago.
“If not love, one can learn to appreciate even a junkyard dog, if the said yard is near and dear to them...”

Disagree with what? That's the exact same fish that I linked to. lol
He who dares not offend cannot be honest. - Thomas Paine
Reactions: twentyleagues

Did you see the “other methods”?
“If not love, one can learn to appreciate even a junkyard dog, if the said yard is near and dear to them...”

You said you disagreed, I clearly stated: Are their larger WC specimens that have been documented? I would love to see them. If those other methods are documented cases, then bravo. But from what I can see (some of that page is blocked by ads for me) there is only one documented fish represented on the page that you linked to - the rest are "unknown" or "questionable".
He who dares not offend cannot be honest. - Thomas Paine
Reactions: Renegade Aquatics

Ok, I understand your point of view and it’s reasonable. My question is if they recognized it then why didn’t they list how it was caught or have more concrete proof?
“If not love, one can learn to appreciate even a junkyard dog, if the said yard is near and dear to them...”

They state below: records based on anecdotal reports, verification not possible. That seems pretty clear to me, and it's not just a point of view. It's the facts as they were presented. The only fish truly recognized on that page is the one that I previously linked to. Currently, the RTC raised in captivity is winning.
He who dares not offend cannot be honest. - Thomas Paine 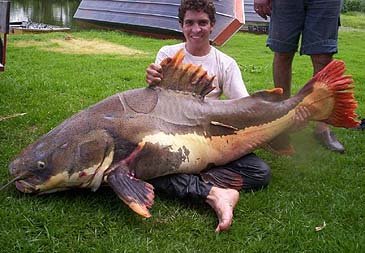 Fishman Dave said:
One thing I don't get in all of this talk about potential runts and throw outs from commercial farms breeding fish to feed people:-
If I were breeding a fish to feed people, I would use parents which had the best growth, the biggest fish, the fastest growing ones, and id feed the little ones up fast, ok maybe not with the best food but just like chickens, you want big uns fast and get rid.
So if the aquatics trade gets so many poor quality slow growing, smaller fish, then how???????
Where do they all come from?????I
It makes little sense that they are coming from these farms.
Or is someone trying to tell me that some expert Japanese koi breeder who can spot a show koi at 1cm from 100 yds is now in a fish farm spotting potential slow growing cats and runts at 1".
Click to expand...

Hi Dave, glad to see you back. You are objecting to what I said and usually say and I am usually alone in saying it, so it's just a conjecture of mine. You may be right.

Yet, in my defense, the farms work quite efficiently at rooting out underperforming youngsters. There are clever machines that work like a sifter for live fish and these machines separate the batches of fish by size efficiently. Some use pipes of various diameter, some use spinning rollers, etc.


Sometimes it is done semi-manually:

The sifting is done many times throughout the early growing stages. All underperformers better be removed while small.

I believe the vast majority of the culls is made into fertilizer or fish meal / fish feed. Ornamental fish trade gets probably the tiniest portion of all the culled biomaterial - the market is puny versus other markets.

The sorting of fingerling is one of the crucial and fundamental operations at any fish farm or hatchery. No matter how great your parent fish are, the offspring will be subject to a bell-type curve in terms of growth rates, etc. and the slowest ones will hurt the bottom line. Mathematical modeling is used to optimize the whole operation and to determine the sweet spot at which to "dissect" the bell curve into the keepers and culls, which will result in the highest profit and smallest losses.
Last edited: Aug 27, 2019
My DIY Public Aquarium build http://www.planetcatfish.com/forum/viewtopic.php?f=4&t=33968
Vids & pics on MFK http://www.monsterfishkeepers.com/forums/threads/fish-story-aquarium-and-rescue-naples-fl-two-4500-gal-13x13x4-5.603969/
My databases http://www.monsterfishkeepers.com/forums/threads/two-databases-longest-f-w-fish-rating-f-w-fish-by-continent-and-family.660258/
Reactions: Renegade Aquatics, twentyleagues, RD. and 1 other person

Even questionable and verification not possible, that is one heck of an RTC!

We may need to get the tape out again for a 2019 measurement on the zoo specimen. lol
He who dares not offend cannot be honest. - Thomas Paine
Reactions: Renegade Aquatics, thebiggerthebetter and twentyleagues
You must log in or register to reply here.
Share:
Facebook Twitter Reddit Pinterest Tumblr WhatsApp Email Link
Top Bottom