Finally got around to converting the water change system on my 190g. Before I had it setup as a semi-automatic system as you can see in my build thread (link in sig). I had an aging barrel with a pump and a separate pump to drain water to a nearby sink. The two pumps were controlled by a wireless remote. I had to do no siphoning or carry around hoses. Easy, but it was still too much work So today I finally went fully-automatic because I hate doing water changes and I'd been slacking off lately.

Indoor tanks present a challenge for automatic water changers. Especially when they're in the middle of the house and not next to any accessible plumbing. Also, you can't really take advantage of a simple drip system with a gravity drain like you could with a tank in the garage. It takes some creativity. I thought about using an automatic top-off controller to keep the sump refilled but that was too complicated. I could have run a constant drip but I would need an intricate system of float switches and solenoids to safeguard against flooding when the power was turned off.

So I went for the simplest setup you could imagine (thanks to Dan F for ideas on his system). I have a drain pump in the sump that comes on set intervals via a digital timer to drain water. The sump is then refilled via a simple mechanical float valve. That's it. Can't get much simpler than that. Problem on doing this on an indoor tank in a room is getting a water line to the tank and then what to do with the waste water. This will almost always involve drilling some holes in your walls. Can't get around it. But the nice thing is you're not relying on gravity whatsoever. You're free to run the waste water line wherever you like.

This system is also very safe to run. If the drain pump fails there's no risk of flooding or running the system dry; you just won't have water changes done. If the entire power goes, again, no risk of flooding. And because the float valve won't be activated, there won't be water entering the system while the power is off. The only real problem area is the float valve. If it were to fail, you could either flood your system or run it dry and burn out your pumps. But these things are so mechanically simple that the chance for failure is very low. I purchased a good quality float valve from Jehmco as seen here: http://jehmco.com/html/float_valves___switches.html


Here's my source for the feed water, my laundry room. Just a simple tap into the cold water line which feeds an RO unit. The water line is routed through the house straight to the sump's float valve as you'll see below. Note: This is an older photo. I'm no longer running RO/DI since I stopped keeping wild discus. I simply removed the RO membrane and emptied the DI canister. Now I simply use this system with a sediment filter and a few cartridges for chlorine/chloramine removal: 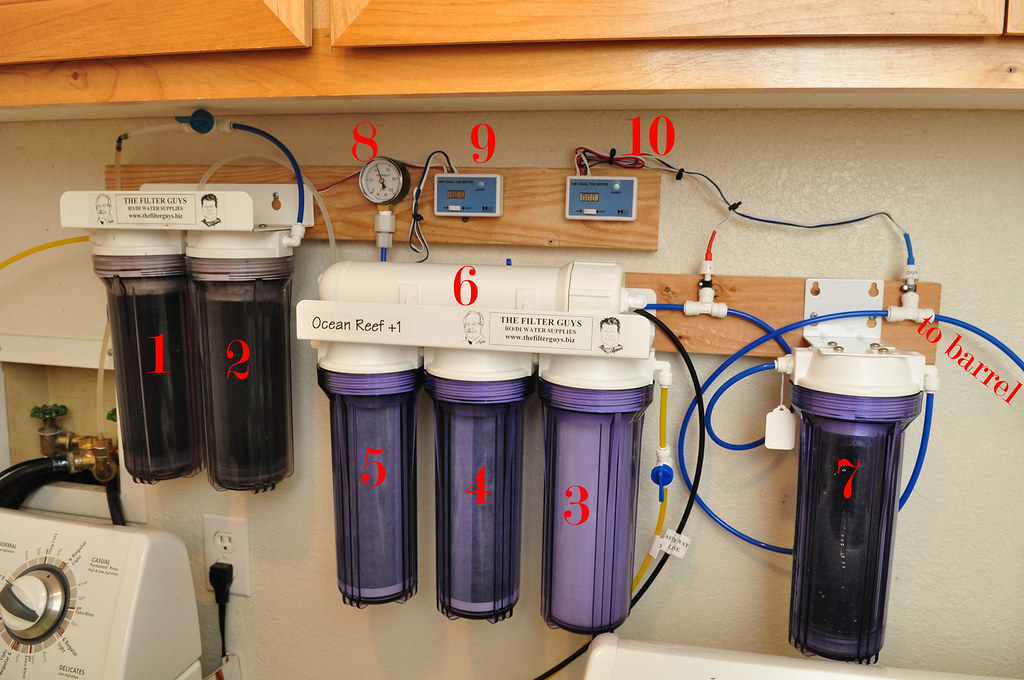 This is the 40g sump on my tank. Here's the separate drain pump I'm using. It's a Quiet One 4000 rated at about 1000gph. This pump is independent of the pumps that run my filtration. This pump runs straight to the waste line: 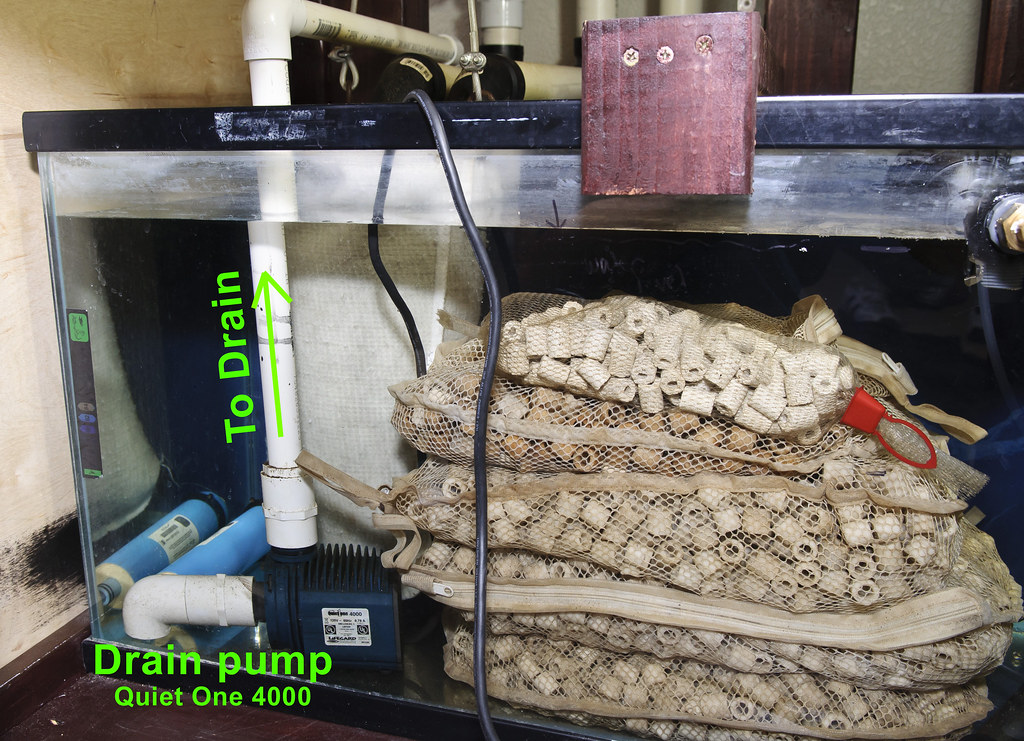 This is the digital timer I'm using to control the system (from Home Depot). I currently have it set it to 8x 3-minute intervals a day, 3hrs apart. Based on the water level drop in the sump, I've calculated that I'm draining about 11 gallons during the 3 minute interval. This is about 88g a day. Overkill for my tank for sure. I plan on checking nitrate levels after a week to see where I'm at. I will probably scale it back to about 3x a day. 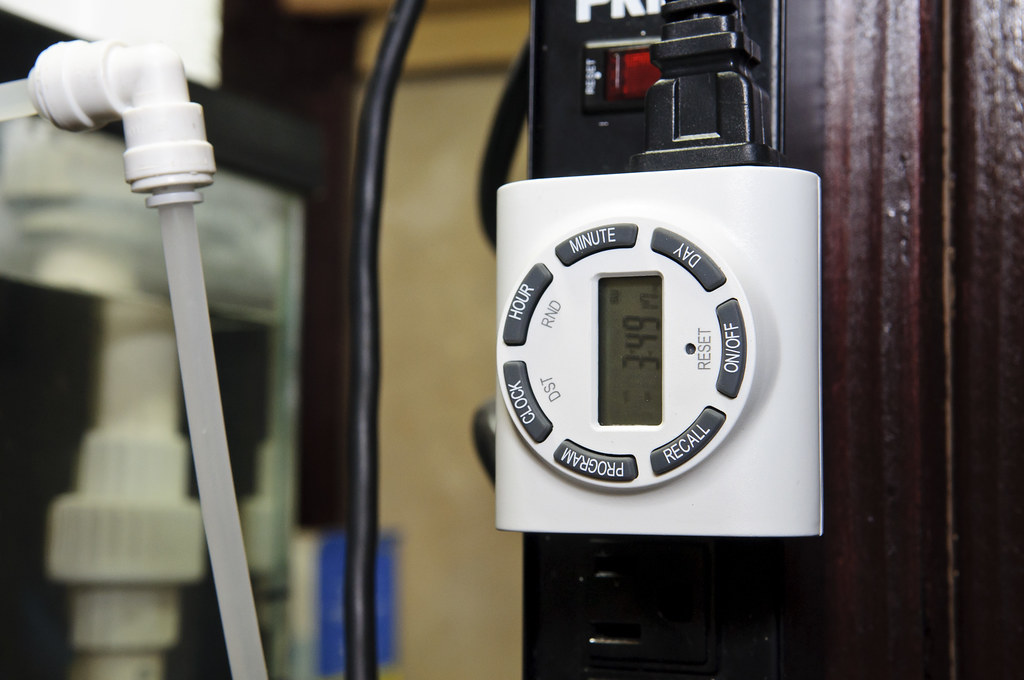 This is the float valve installed to refill the sump after draining. Installation was very simple, just required a 3/4" hole. If you're scared of drilling glass, GET OVER IT I drilled this hole vertically with the sump full of water and the tank running. Feed line is coming directly from the RO unit. 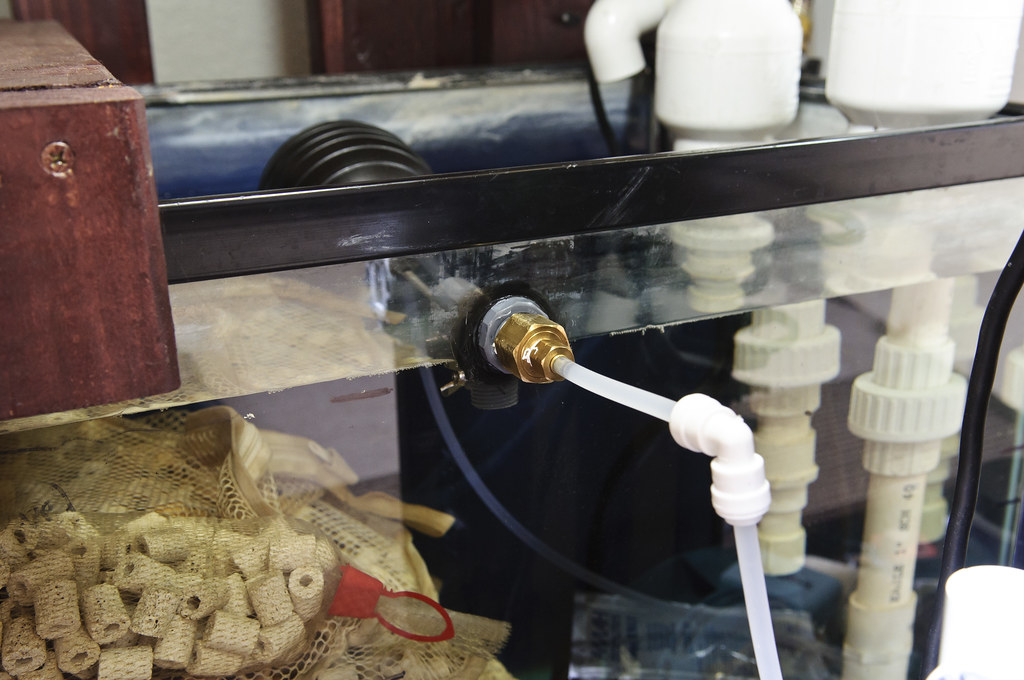 Picture of the float valve: 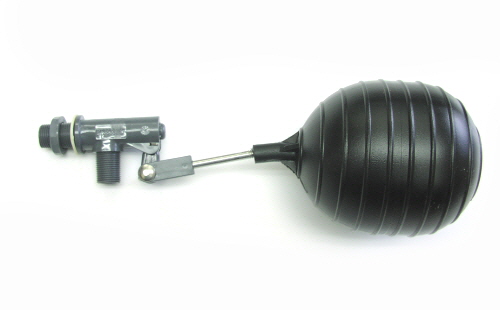 Here's the closet that's close to the tank. This is where I did my drilling. One small hole for the feed line and a larger hole for the waste line. The closet shares a wall with the bathroom so this was the easiest place to drill. The waste line only passes through a few inches of wall space. 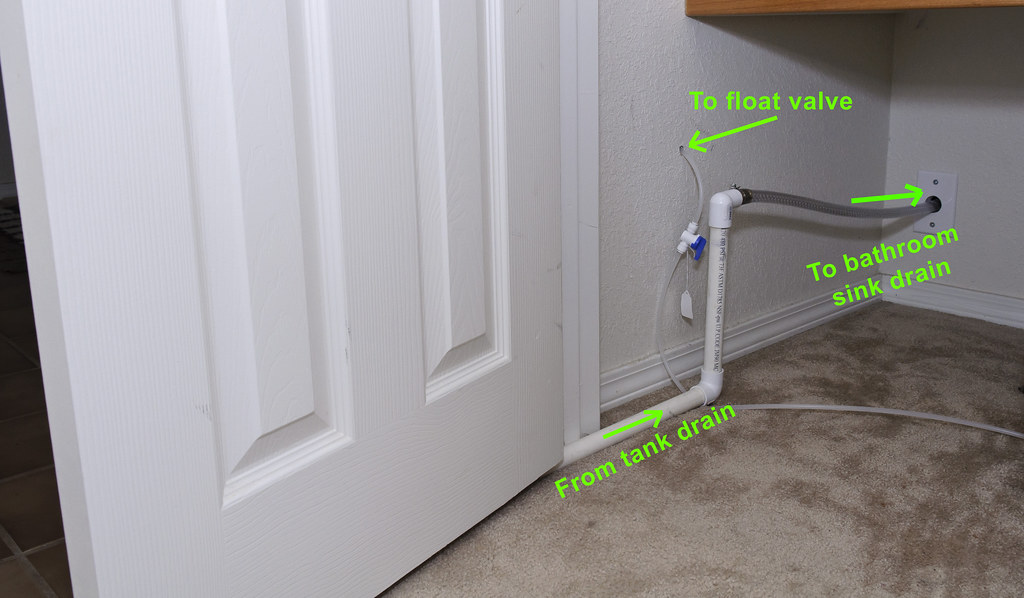 And lastly, here's a photo under my bathroom sink. This was a piece of cake as well. All I needed was a new down pipe with a dishwasher drain fitting. This attached directly to the existing P-trap. 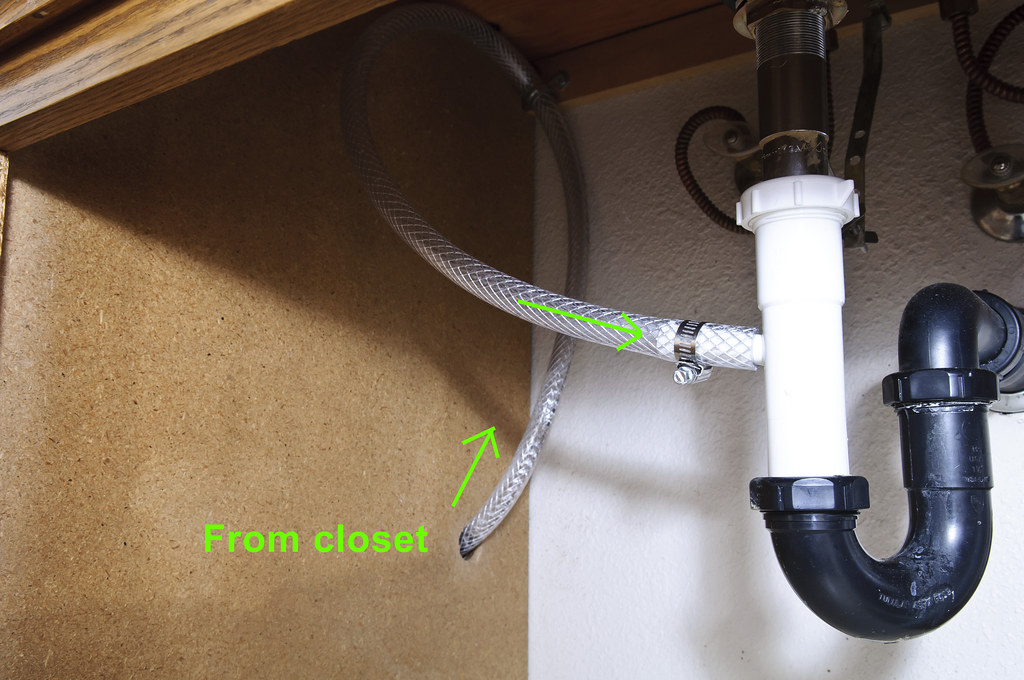 And that's it! See, simple Just a couple of bucks in plumbing parts, some elbow grease and you're free from doing water changes. Now if I could only figure out a way to automate changing of the filter socks

Any questions, critique, suggestions, whatever, put 'em up! I gave it a few test runs and all works well. No issues draining or refilling. Let's see how it works!
Expand signature

A gun is like a parachute. If you need one and don't have one, you'll probably never need one again.
Reactions: lnelms2
P

That is pretty sweeeeet. I wish I had my tank in a position in the house where i could route the water outside or into a drain but unfortunately the only place it fits is too far from any window or drain where my wife wouldn't kill me for running pipes etc

cemster said:
That is pretty sweeeeet. I wish I had my tank in a position in the house where i could route the water outside or into a drain but unfortunately the only place it fits is too far from any window or drain where my wife wouldn't kill me for running pipes etc
Click to expand...

It can be done, if you're willing to drill and get creative. Feed and drain lines can come from anywhere in the house since it's not gravity fed. But you'll have to do a lot of snaking and fishing lines through the walls
Expand signature

A gun is like a parachute. If you need one and don't have one, you'll probably never need one again.

Looks great, definitely follows the K.I.S.S. philosophy. I honestly can't understand why more people don't do it this way. Besides the simplicity of the plumbing and the unlikely chance of failure, you can adjust the water change very accurately by simply pushing a few buttons.

This is really impressive. I can't wait till i live in a house instead of an apartment so i can do something like this

Thanks guys This definitely is a nice way to automate your water changes!
Expand signature

A gun is like a parachute. If you need one and don't have one, you'll probably never need one again.
M

Nice job. Thanks for sharing.

Nice set up. I tried doing that but after my sump drained the refill flow from my 1/4" couldn't refill fast enough and my sump went dry. Now I have to do it manually anyway by shutting off the tank pump before the sump refills back up.
Expand signature
My big tank build 650g w/ Wetsuit
http://www.monsterfishkeepers.com/forums/showthread.php?t=378870
You must log in or register to reply here.
Share:
Facebook Twitter Reddit Pinterest Tumblr WhatsApp Email Link
Top Bottom