Bad Cat, my personal Journey in to RTC

Let me start by saying I have kept fish for a very long time. Really, by the time I was 7, I had fish, frogs, all sorts of stuff. So as my "hobby" became a job, then back to being a hobby, I have had a chance to cut my teeth on a few critters.
One I love is the red tailed catfish.
Well... I decided that my shop needed a mascot.
So, I ordered a red tailed catfish from the local fish store and hoped for the best.
My little RTC came in at 3/4 of an inch long. I was super excited.
I started off feeding him worms, pellets, and the occasional tank mate. While this became irritating at times, the little fish grew fairly fast. (Yes, as expected) 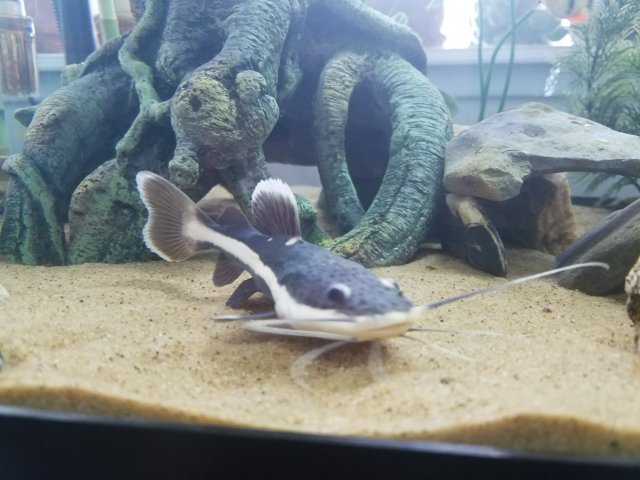 This was in March 2017... by this time "Bad Cat" was about 3 1/2 inches long. I picked him up in 2016 December.
Well, the small fish became dinner, worms became salad shrimp, and feeding him by hand was a must. Also, calling him.... "here kitty kitty kitty!" Or.... "here fishy fishy fishy!"
Once Bad Cat became around 6 inches long he was living in a 75 gallon tank. He decided to eat a school of adult tiger barbs... my girlfriend's fish.
Now he would get along with everyone, then one night... the killer would come out and eat. This was great fun for me... despite the fact I would look all shocked.
So when 8 inches came around, into the 150 gallon tank he went. (I say he only because I do not know) 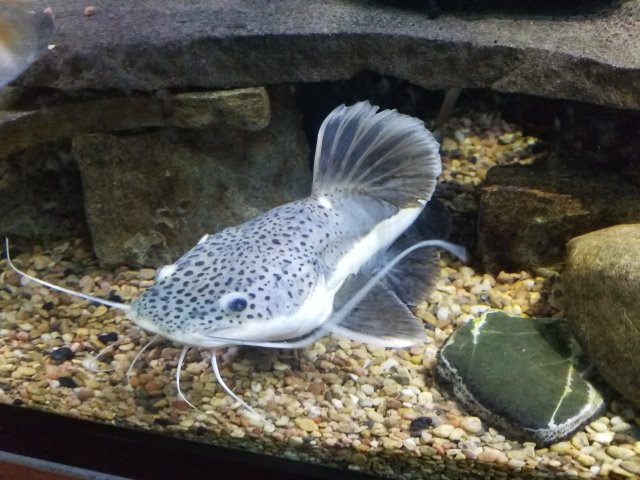 Bad Cat was by this time, my buddy. Oh, he was bad all right... but, begging for food, exploring... he was just incredibly interesting. Always wanting a snack... I did try not to feed him to much. 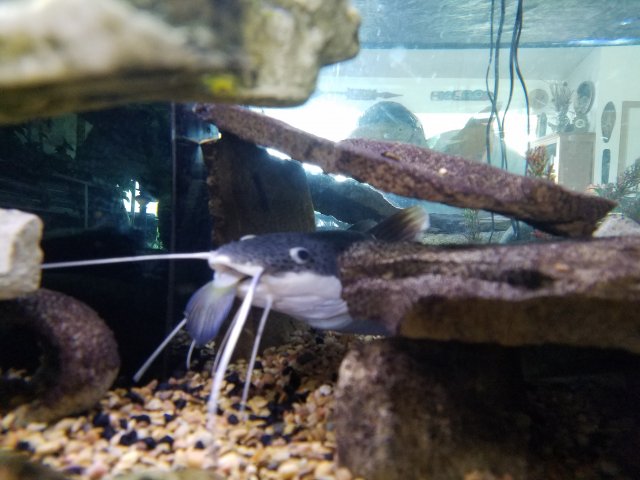 Then this happened... Bad Cat ate my 13 1/2 inch Asian arrowana...
The photo is from day 3 of digestion. Bad Cat was 7 to 8 inches maybe 9 inches long... there were MUCH smaller fish in the tank... MUCH smaller. But Bad Cat ate my other beloved fish.
I cursed like a sailor...
(I do anyway)
Ok... it was set into stone. Any fish I wanted to keep, could not be in with Bad Cat.
So... Bad Cat would be great for months, being a good little kitty... then, the saber toothed tiger would come out.
Bad Cat would never eat someone I really wanted him too... it would be some tank mate that had been with him for months. 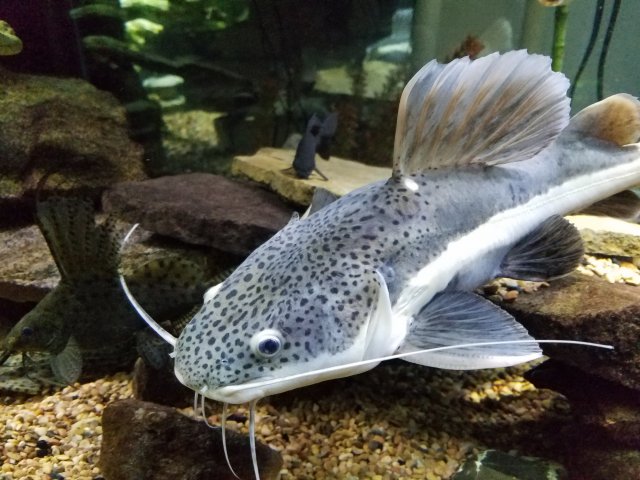 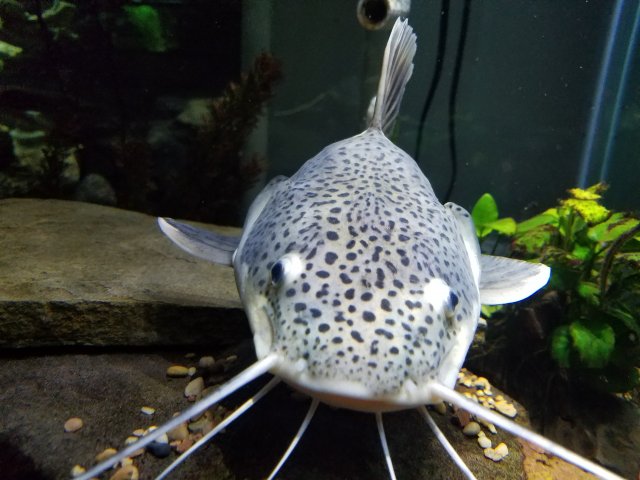 By this time, Bad Cat was pushing about 14 inches. Oh how I loved my kitty.
So, it was time... I picked up a 210 gallon tank, placed a 40 gallon sump with filter, heater, and bio balls... then hocked up a canister filter good for a 120 gallon tank.
Bad Cat was at the shop and with me during the day. He was little... so, oscars were added. Just to keep things lively. 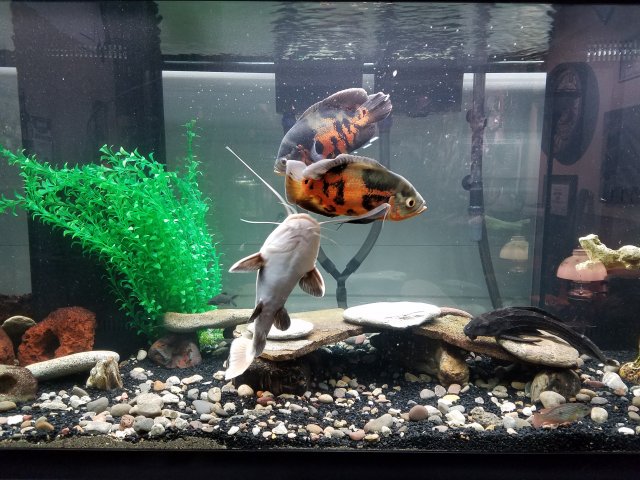 Large plecos... helped, throwing smaller fish into the sump helped with the food getting into the over flow.
Of course Bad Cat loved the space. Pretty soon my kitty was eating a lot... as his growth spurt would be in full tilt, he would "shead" and pack on the weight. I decided his nearly daily snacks should be cut down to ever 3 days...
Well... Bad Cat had other ideas... 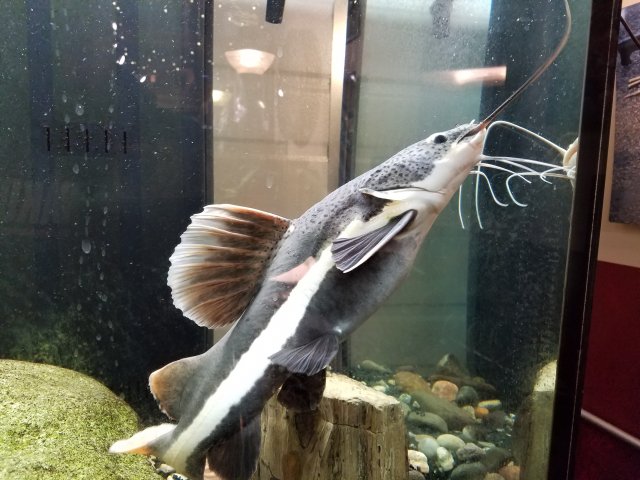 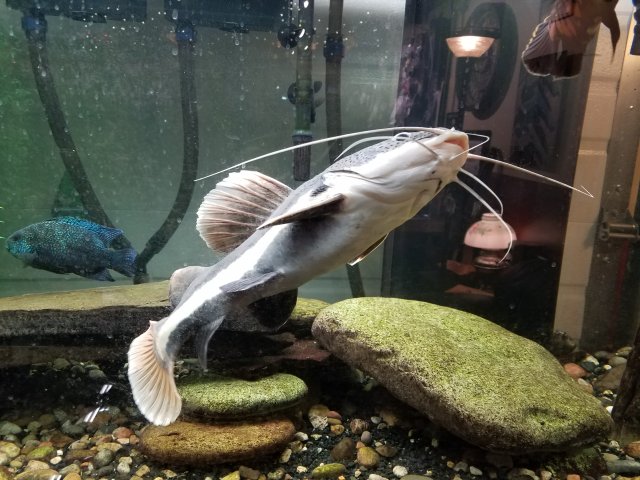 By January 2018, Bad Cat was over 20 inches...
He ate Jack Dempseys, he ate 6 large shrimp with shells, he ate just about anything he wanted... on his own schedule. 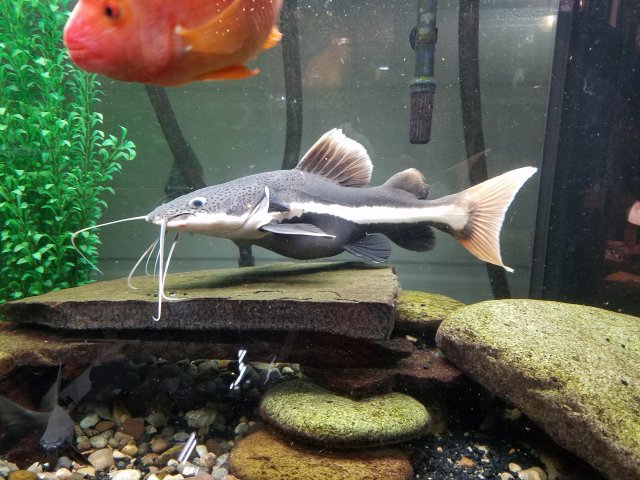 In this photo, you can see the female red devil (hate them) and Bad Cat's buddy, the black shark... oh, and I think this was the Jack Dempseys from the other photo... inside Bad Cat.
He was on a plan... to eat his way into a new tank. 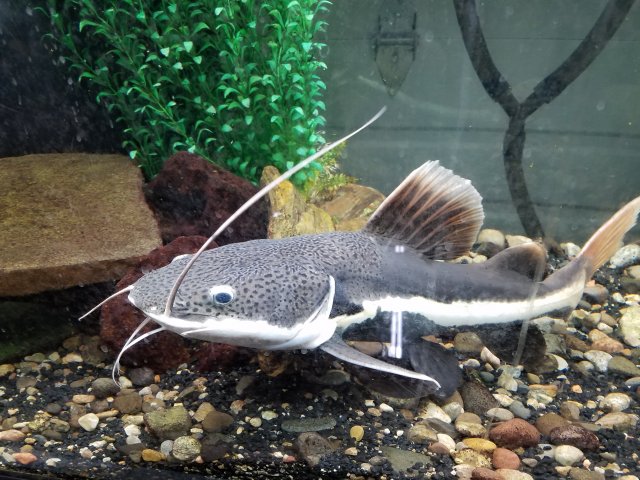 Bad Cat was king... of his tank. The Oscars decided they wanted to breed. So I moved them into a small 65 gallon and took the pare that were in that tank and added them to Bad Cat's... after all, baby oscars would help feed my RTC

This didnt end well for the new oscars. 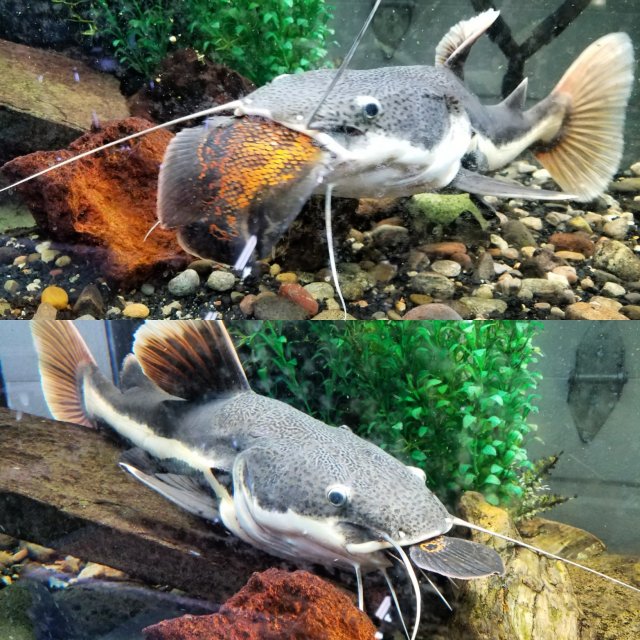 By April 2018... the Oscar's were starting to try to convince Bad Cat that they owned a rock in the center of the tank. Bad Cat replied with his usual manner. He ate the male.

I knew this would happen, but again, I though the smaller female would be first. Well she was 4 days later.... 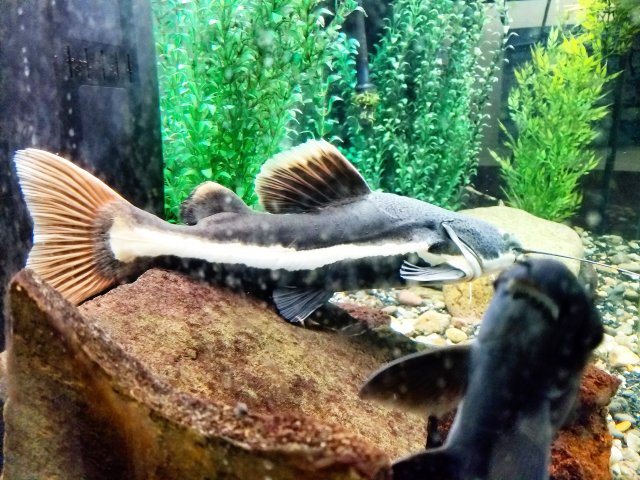 Bad Cat was king once again...
He even had a jester.... that stupid black shark... that black shark has balls too... Bad Cat will be on the hunt... full kill mode... that Black shark will swim in front of Bad Cat trying to grab a bite of Bad Cat's meal. Total suicide in my option, but.... they get along so who am I to say?
Reactions: Backfromthedead, beau1990, Rob909 and 3 others

Bad Cat kept growing, but not nearly as fast. He was approaching 24 inches. His eating was still quite unpredictable. Some days he would come up to say hi, only to not want food. Other days, I knew he wanted a snack. Not big meals... but something. 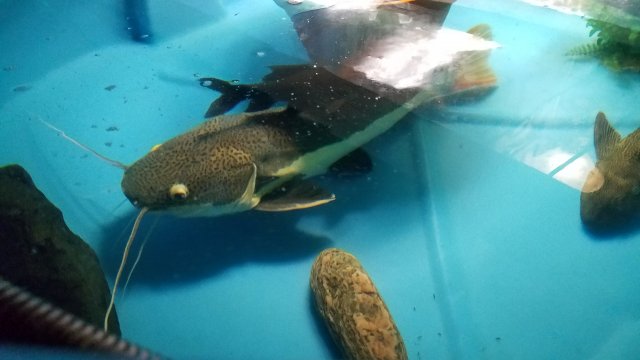 Bad Cat, his buddy the black shark, and a 18 inch pleco were moved into a 300 gallon tank... it took a month for Bad Cat to get used to me being over the top of him. His natural fear of being attacked from above causing him to spook a lot. This also made feeding him harder. 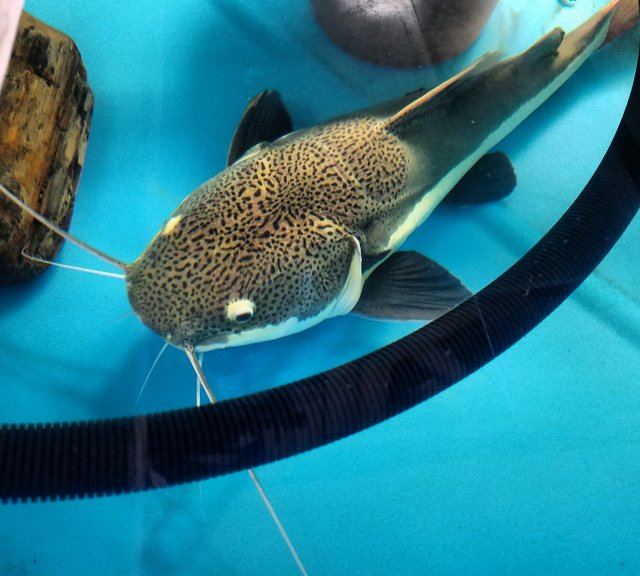 But by last week, Bad Cat was back to being bad... he finally killed that 18 inch pleco. Have no idea why... he had 2 Oscars and a frontosa that Bad Cat had eaten the other 6 siblings. (All over 8 inches long)
The Black shark is still his buddy. I still feed Bad Cat by hand... though he can now swallow that if he wanted to.
He eats shrimp still. Eats the heads of the oscars I end up sending to the frying pan... (yes, I eat them, quite tasty really) and my new RTCs eat the guts... my middle one has no name.... 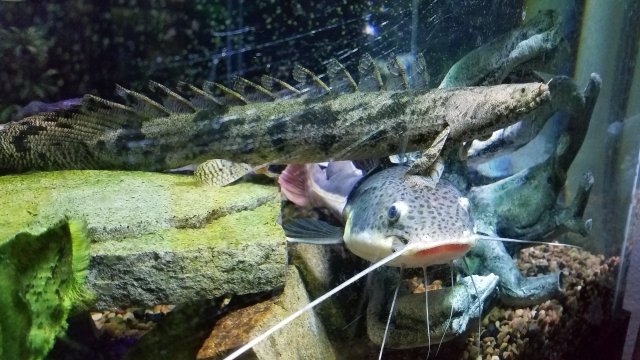 But the smallest one is named PAC MAN...
I feed Pac Man by hand too.... just not the same though. Bad Cat is still my buddy.... I can grab his tail and tug on him sometimes even. Yep... he is still growing, and is at least 25 to 26 inches.... very hard to measure him now. Pectoral find tip to tip is nearly 12 inches. His head is around 8 to 9 inches wide.
I run 2 protected 300 watt heaters, 2 fluval FX6 filters, a small UV filter and an extra large air pump with 4 airs stones. Tank is bare but for the large flat rocks and the large stones... fake plants...
I am doing about a 30% water change every week or so... depends on his eating habits. The more he eats, the more water I change.
Reactions: beau1990, Rob909, justarn and 6 others

Great write up lol quite the experience
Reactions: Loco Lucas and Matteus

Bad cat sure is beautiful. Makes me want to get a trouble maker like that some day. Don’t think I have room for a 1-2k tank for a while though. What is your shop that he is a mascot for?
Reactions: Loco Lucas

Matteus said:
Bad cat sure is beautiful. Makes me want to get a trouble maker like that some day. Don’t think I have room for a 1-2k tank for a while though. What is your shop that he is a mascot for?
Click to expand...

I run Rogue Gunn Works... it is a class 7 FFL and SOT... in short I build everything that people really want to have, but cannot. I am an Advanced Certified Cerakote applicator.
Reactions: Rob909, Matteus, thebiggerthebetter and 1 other person

Bad Cat seems like quite the character! And I must say, is adorable, even for a murderer.
Expand signature
"With regards to animal welfare the question is not can they speak, nor is it can they reason. The question to ask is can they suffer?" - Jeremy Bentham.
Reactions: Matteus and Loco Lucas

My 8" black shark also befriended my 25" Piraiba Catfish. I'm sure there's other case like this.
Reactions: Matteus and Loco Lucas

GiantFishKeeper101 said:
My 8" black shark also befriended my 25" Piraiba Catfish. I'm sure there's other case like this.
Click to expand...

Maybe it is un the nature of the Black shark? I have never been a fan of them. Red tailed sharks can be much the same way, only they are small... my black shark must be at least 9 to 10 inches long. It does do a good job of cleaning up after the larger fish.
Reactions: Matteus

So as my life changes, so does the living quarters of my fish.
I am going through a separation with my girlfriend of 7 years. I have a 65, 75, and 150 gallon tank at our once shared rental.
All of those must be moved to my shop where I have made room. But the transfer maybe very interesting.... it is cold here in Montana, and my shop doesn't have warm water to refill tanks.
Lucky for me, Bad Cat is already there. But, I may have to move fish over and place into tanks while I move the tanks.
Say that 10 times fast.
Worst case, I have to place fish in with others during this move.
Or, I will load up buckets, move tanks, refill tanks with buckets of fish, then if I still do not have enough warm water, use water from the bigger tanks at the shop then just simply top off all the tanks with cold. Now I have been doing water changes like this for 3 years at my shop.
While it drops the temp by 5 to 8 degrees, storms in the wild do crazy temperature changes by the same amount all the time.
I am just thinking of how the fish will react to the possibility of short term tank mates. Hahhahahhaa
Reactions: thebiggerthebetter

Thank you for this delightful write-up! If I could give you a hundred likes, I would. A lot of invaluable lessons in here for anyone thinking about keeping an RTC for the next 20-30 years.

At my present understanding, I think Bad Cat is a male due to its moderate (for an RTC) growth rate and size at this age and its head shape, which is narrower and not as flat as the heads of the females IME.

Yes, IME when RTCs get large, they stop feeding at the same intensity all the time and go through periods of stronger or weaker appetites, with an occasional fast here and there. One must be careful though it is not related to water quality. The ammonia and nitrite must read firmly at zero ppm by a liquid API test kit. Nitrates low, pH, KH, and temp stable. Aeration vigorous at all times. I've lost some RTCs due to inadequate aeration, which resulted in lethal indigestion.

EDIT: yes, moving sucks. Logistics is the key. If you had time, it'd help. Even could consider selling off all fish and get a fresh start at the new place. GF of 7 years? What's wrong with you? You that indecisive?
Expand signature
My DIY Public Aquarium build http://www.planetcatfish.com/forum/viewtopic.php?f=4&t=33968
Vids & pics on MFK http://www.monsterfishkeepers.com/f...scue-naples-fl-two-4500-gal-13x13x4-5.603969/
My databases http://www.monsterfishkeepers.com/f...ting-f-w-fish-by-continent-and-family.660258/
Reactions: Rob909, Matteus and Loco Lucas
You must log in or register to reply here.
Share:
Facebook Twitter Reddit Pinterest Tumblr WhatsApp Email Link
Top Bottom