Howdy folks, other than an introduction this is my first post. I've been lurking for a while and learning a bit from the brain trust here. I've tried searching here and at other sites with no luck in identifying these critters.

A bit of background: The tank in question is a 10 gal FW that was previously my live bearer tank. As the grand-daughter really loved to see all the pretty fishes we decided to gift her this tank and transferred everything in to a 15 gal. We cleaned up the 10g and filled it with about 8 pounds of cleaned and rinsed gravel and a few fake plants. As luck would have it we came upon a few fish at the LFS that need a new home and ended up using the 10g as a QT for a while. During QT we did have one mortality due to what I now believe was a swim bladder issue. Methylene Blue and Maracyn were both used during that QT. At end of that QT the tank was once again tore down and completely cleaned in preparation to pass on. Cleaned all substrate and decorations in mild bleach wash and thorough rinse followed by vinegar wash and rinse. HOB filter was cleaned thoroughly and new floss/media inserted (AC). Tank was filled from the tap and seeded from the HOB on the live-bearers tank. Sat running with an HOB, aerator and heater (without stock) for a week or so to begin cycling before passing to grand-daughter. Ended up having to drain most of the water out and running just the aerator for about a week before we could actually deliver. Upon delivery daughter was instructed to refill, test every few days to observe the cycle, and not stock until we were sure all was GTG (that was 2 weeks ago).

This evening the daughter called to say that she was ready to purchase stock as a reward for the grand-daughter and was testing again to be sure and while testing notice some strange (things) in the water. She also said that she had been killing/removing quite a few snails in the last week. Now hearing that snails had somehow survived the QT as well as the complete cleaning after the QT came as quite a surprise but the presence of some strange things really piqued my interest and required an eyes on inspection.

Pics below are of what I found. These critters are literally everywhere in the tank (substrate, plants, glass and free-floating. They are very small (1/16in or smaller) but easily seen with the naked eye. They appear white in color. Though not real clear in the picture the general body shape is reminiscent of a small tree with branches reaching out at an angle from the top of the main stem. 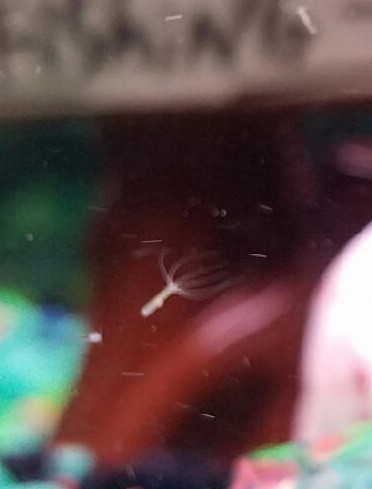 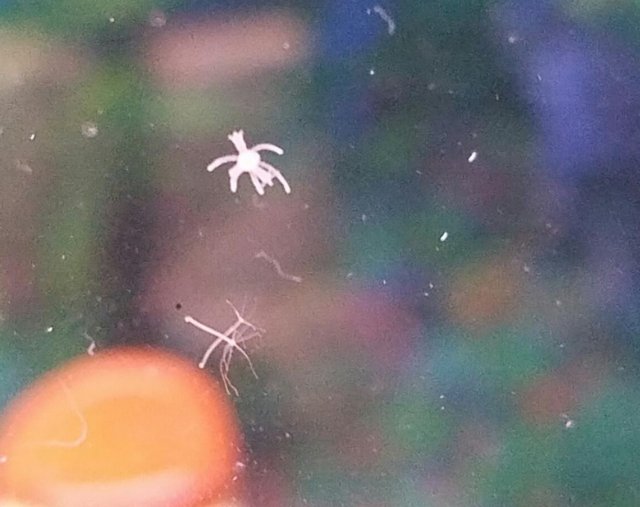 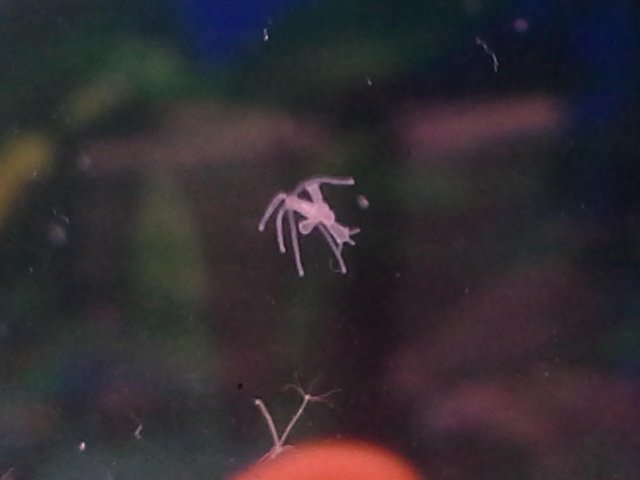 Sorry they aren't better pics, but they're the best I could get with a cellphone. I would really appreciate any info that can be offered on the ID of these creatures and how best to deal with the infestation.
Reactions: Deadliestviper7 and GamerChick5567

Yep you have a hydra infestation in the tank.
Expand signature
We're from Philly and we fight!
-The Eagles

If you are overstocked,these guys will certainly help with that.
Reactions: FastFisher5, Rok55 and tlindsey
R

Hmm, so Cyclops copepods are present in almost all aquaria both SW and FW and in fact are bred as a food source in the refugium of some SW systems. Further, it seems that Hydra in fact are known to feed on Copepods as do a great many sea creatures. Interesting info but I found nothing in the reading indicating whether this infestation precludes stocking the tank. I understand there can be health issues for human handlers but not usually as they eradicated in treated water supplies.

I have seen no evidence of Hydra or Copepods in my tanks so I can only assume they were present in the water at the Daughters house (or am I missing something).

Is it safe to stock the tank with a couple of Mollies or Skirted Tetras?
Should she tear it down, bleach treat everything and start over?
Reactions: Deadliestviper7

It should be fine, unless you're breeding as they can eat fry. You can get rind of them with salt, you can read this https://www.aquariacentral.com/forums/threads/should-i-be-concerned-about-hydra.82066/ for more info
Reactions: Frank Castle, tlindsey and Rok55
R

Thanks for the reply. I'll do a bit more research and update here as things progress.
Reactions: Renegade Aquatics

Let the snails live and the hydra will go away,snails eat foods that hydras would otherwise eat,and can help plants grow as result of the waste they produce in liquid form,with out snails fish would not be able to exist in most bodies of water.

You got the cool looking ones, fresh water sea anemones. AKA Hydra.
I still have a population in my tank. They feed mostly on bacteria.
Your aquarium has a lot of organics in it.
Reactions: tlindsey
You must log in or register to reply here.
Share:
Facebook Twitter Reddit Pinterest Tumblr WhatsApp Email Link
Top Bottom