Gday,
Kept fish for about 24 months now in a tropical setting at 28 Degrees Celsius.

Have recently added a common pleco. Chosen mainly because our two male Bristlenose who were accompanied by a female (which was our first fish) they have become inactive and hide in the bottom of our largest ornament.

About 20 bristle nose were produced and I believe within a week the discus and a Pictus catfish we had at the time we’re eating the fry and less than 5 remained. Another two also “disappeared” shortly after. I also believe a Pictus catfish I had ate a couple of my Rummynose tetras. I did ask the store before purchasing him how he would get along with the other fish and was told he would be fine. He went back to the shop.
Since then I have not lost any Rummynose tetras and I think he was eating them during the night.
Look I’m sorry if this gets anyone triggered IRT the fish eat fish situation. However that was not ever my intention, and he is no longer in the tank.
This is the first forum I’ve joined and I really enjoy keeping my fish and I AM open to critasism just please don’t crucify me, I want to learn. haha

After raising the eggs left by the female the males Bristlenose rarely leave their “cave”.

So I decided to get a common pleco, have read about their growth rate and temperament and I think he will be happy in the tank.

However I also was told the Pictus would get along well in there.. and he ate the little red heads.

———-In short I want to know if the common pleco will live well in the tank and anything I should use to supplement his diet or look after him, have been told they enjoy veggies.———

What size is the tank?
While I don’t think you should have too many problems with him and your stock, bio load is the biggest concern.
I have a common. He is 14” and is a pooing machine. Lol
Zucchini, squash, algae wafers, and sinking pellets are my guys favorites.
Reactions: tlindsey and Fat Homer
B

What size is the tank?
While I don’t think you should have too many problems with him and your stock, bio load is the biggest concern.
I have a common. He is 14” and is a pooing machine. Lol
Zucchini, squash, algae wafers, and sinking pellets are my guys favorites.
Click to expand...

Gday, awesome!
It’s a 400L tank or about 105G
We just switched from fortnightly 25% water change to about 10% each week. I don’t right now have any live plants but might consider it if they will help keep the water more stable.
Can I ask u, how long did the pleco have in your tank to become 14” and did you have it since small? 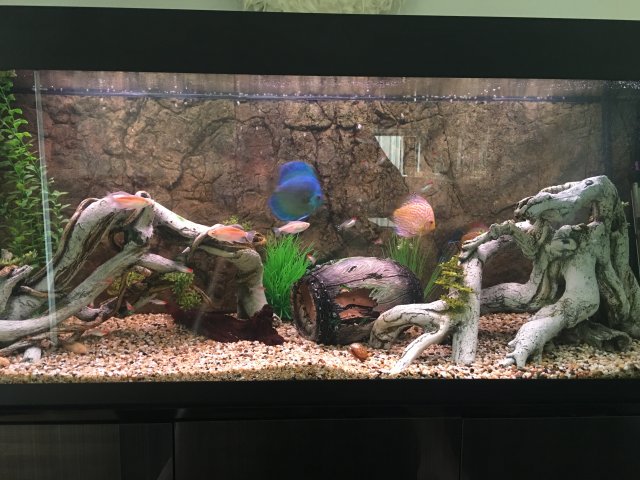 Reactions: tlindsey and The Morning

I got him at around 1 1/2”-2” maybe 2 years ago. I had two but they fought a lot and disrupted the whole tank in doing so. So I sold the second one.

You’ll want to increase your water change schedule. Around here 50% or more a week is very common. I personally do fin level weekly or about every 5 days.
With adding the common your bio will greatly increase as it grows.

Live plants are great to add. Pothos are great for having roots in the tank and the leaves hanging out over the edge. And there are many aquatic plants to choose. They will help with nitrates.
Reactions: tlindsey and Fat Homer
B

wow, that’s a big difference in changes.
Would that be mainly because of the pleco or is that just standard?
I understand they are good but doesn’t it create some shock having half the tank changed each week? I have kept this up for the last couple of years and the fish all look very healthy, their vibrant and active.

I do a 50% change every couple of months when I disassemble and clean the canister filter.

I also want to say I do not match the temperature of water during changes, just condition the water.
I thought this was something that fish would be used to as if it were just a cold current or seasonal change.
If I do 50% changes weekly I think I would need to be adding warmer water which I can do easily too
Reactions: tlindsey

You’ll want to try and temp match. I know I’m mostly off by 5 degrees or so F. Not perfect, but my fish aren’t bothered by it.

I’d say it’s standard in a fully stocked tank. But even in a nearly empty grow out tank it only benefits the fish to have more fresh water over less.
Adding the common might over load your tank in a couple years. So it will be something to watch out for.

I really like your blue discus. Very beautiful
Reactions: tlindsey and Fat Homer
B

No worries all good.
Well thanks for advise, I’ll ramp the water changes up and see how that goes. I just have pleco abit of zucchini but it’s preferring the driftwood lol. It’ll get eaten soon.

Yeah he’s a Blue Diamond and about the size of my hand.. believes he owns the tank.. haha. Cheers for the help
Reactions: tlindsey

Are you keeping the plecos for the purpose of algae cleanup or are they fish you enjoy watching? I have found that common plecos don’t do a great job cleaning and this gets worse the bigger they get. I find that a handful of nerite snails do a better job without the mess.
Reactions: MrsE88, tlindsey and Fat Homer
B

Gday mate,
No I actually just enjoy the larger fish and I thought the pleco would be good long term and become the main attraction in the tank.

The discus were my choice aswel due to size shape and colour. My partner likes the smaller fish so we have a mix of both.
we rarely see algae build up in the tank but we do scrub the internal glass before water changes.
You agree I should change a larger volume of my water?

Partner did want snails but was told at the shop the loaches would eat them.

Are you keeping the plecos for the purpose of algae cleanup or are they fish you enjoy watching? I have found that common plecos don’t do a great job cleaning and this gets worse the bigger they get. I find that a handful of nerite snails do a better job without the mess.
Click to expand...

The only thing i dont like about nerites is when they lay their eggs on driftwood. Mainly due to the fact they wont hatch and become hard to remove over time... Otherwise i agree they can be good cleanup crew...

As for the water changes, the reason why 50% or more is recommended for any aquarium is because of the build up of pollutants over time...

For example, if you have a very high bio-load and say parameters (for sakes of ease) are 10ppm across the board before water changes and you only remove 10% a week, you are effectively removing 1ppm...

Then by the next week, your readings may have shot up even further to say 15ppm and again, you remove only 10% you might still be left with 12-14ppm... So over time those extra pollutants are going to cause a lot of problems and possibly sick fish...