Monster Predatory Community Update, it's been a while... Two of the jags have had two successful spawns now. Each time resulting in hundreds of fry. The fry would disappear over the course of a week or so. Someone's eating them at night. But, successful spawning none the less.

There was speculation on another site that the enviornment is too stressful for successful breeding. The loisellis have tried a few times and failed. The jags have proved this theory incorrect.

Aggression is still a non issue. It doesn't exist. All fishes are packing on the pounds. All in all, it's going very well with so many big fishes in such a "small" tank (190g).

Here is the stock and their current sizes: I've also been growing out this female Parachromis motaguense female (Red Tiger Mota) in my African tank. She's at about 5" now and ready to go in with the big guys. 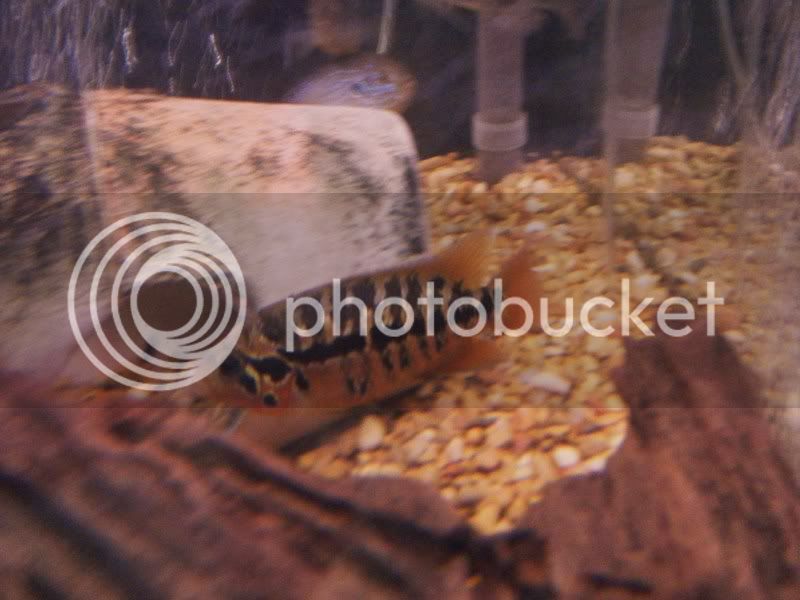 I also picked up two tiny Slavinis from WalMart (of all places) that are in the African tank for now til they get some size on them. When they get 4" to 5" they'll go in with the big guys as well.

All in all, and at the end of the day, this tank has been a lot of hard work to make successful. But the reward of seeing so many big "aggressive" fishes cohabitate together peacefully is even greater. The successful breeding is icing on the cake. I caught a bunch of flak a while back on another cichlid-forum for this set up. But, I think I'm starting to change some minds in regards to successful predatory community tanks. A year ago, the predictions were this set up wouldn't last two weeks, lol. Obviously, there's a lot more than I can put into one post that makes this possible.

Thanks for looking and thanks for this great forum. It has been my true inspiration.

Also, 5 Parachromis juveniles grown out in the big tank from eggs.
S

All but the Convict. He should be named 'miracle' or something for surviving from fry size with these guys. I guess I never named him because he was supposed to be food. Maybe I'll call him 'dinner'.
Expand signature
358g- 2 Parachromis managuense, 2 Parachromis motaguense, 3 Parachromis loiselli, Parachromis dovii, Parachromis sp. "la ceiba yellowhead", 3 Oscars.

Also, 5 Parachromis juveniles grown out in the big tank from eggs.
C

great fish! the names are pretty interesting too
Expand signature

tourdeforce1;2095234; said:
The interaction I've had between African cichlids in my hundred gallon tank has not been dissimilar to that of The Highlander.
Click to expand...

Also, 5 Parachromis juveniles grown out in the big tank from eggs.

Also, 5 Parachromis juveniles grown out in the big tank from eggs.
K