Couple of updates on the build. I've been cycling now for a few weeks which has been going well. Ammonia is dropping to 0 whenever I add a splash in the morning and evening. Nitrites are sky high so just waiting for the nitrite eating bacteria to get going. Per what T Tj203 said, I found that the 2 300W were not enough to bump my 300G plus the 70ishG in the sump to 85F to encourage bacteria growth so ended up getting 2 600W and I'm now easily able to push it up to 85F. I found that the template I used from customaquariums on the glasscages tank was just a bit too short. I probably should have added about .25" to it to have the tank water level ideal. Lesson learned I should have done more than just eyeball it and hope that the tanks had the same trim height. Both the syphon stoppers and the returns were just a bit too high. The syphon stoppers top piece was hitting my glass top, and the added pressure was causing the two middle bulkheads to leak. I got my trusty precision sander out and knocked a good 1/8" off the top of each and they are now able to sit in there and not touch the top and the bulkheads haven't leaked since. Because the returns are not glued I was able to angle them in such a way to allow for more water flow and the water level in the tank is right where it needs to be. Draining the tank into the drain under my spigot did not work I was getting water up on the base of the house, so I ended up going towards the garden I still have to dig a trench so it is not cutting off my gate. Pictures and new hardware news coming soon.
Reactions: Tj203 and celebrist

This is what I ended up with outside. If you look closely at the second picture you can see where the pvc comes out next to the garden. 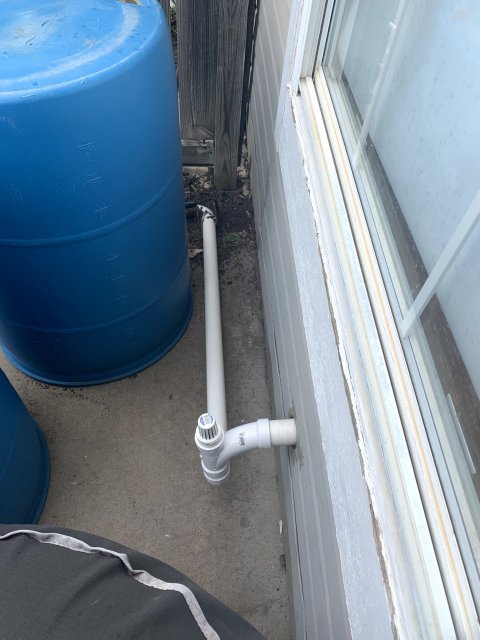 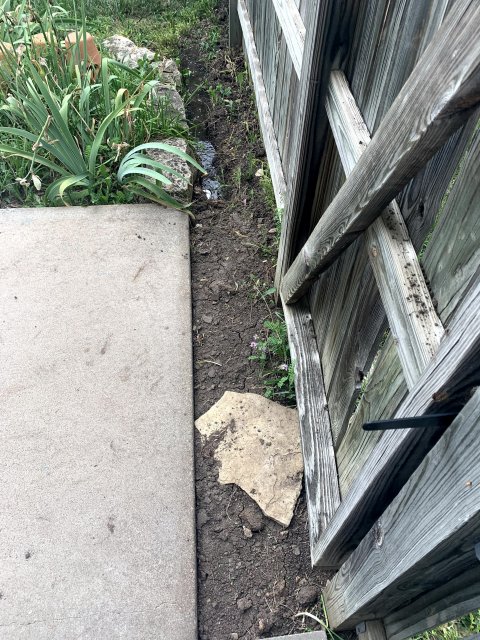 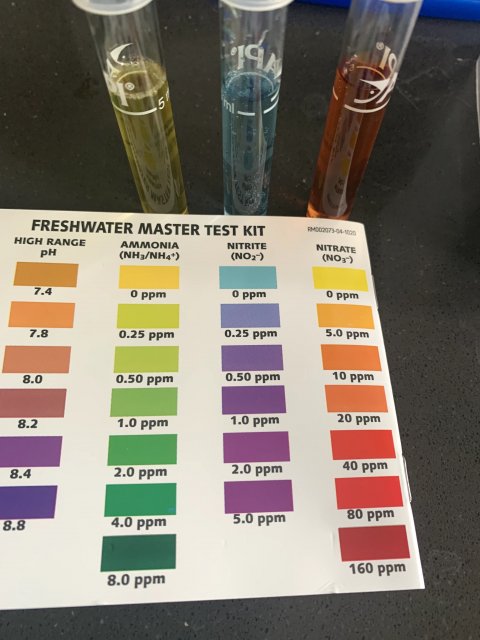 Quick update on status. My (13) 1" rio mag umbee F1's came in from COA today. Dan packed them really well and they got here quickly. No casualties in shipping. They are incredibly difficult to get pictures of though as they are small and like to hide so far. Hopefully they will start coming out a bit more soon. As for filtration I added some filter cups and got a linear piston pump from Jehmco on the way to add some additional bubble action to the sump and the back of the tank and for some added filtration to my 75G's. I had moved 4 of my convicts over into the 300 to keep the bio load up and they were way too hard to catch finally after around 30 min I got them all and got the umbee's into the tank. Here is the best picture I could get of one of the umbee's swimming around. More pictures to follow soon with final shots of sump and tank hopefully later this week or next to finish off this thread. One thing I notice about having that drip system is it sure helps to keep nitrates low. I was shocked after a good 3 weeks of fish in the tank they were only around 30ppm.

Great work and write up! What’s next, cause with your meticulous craftsmanship, you’re going to get bored!!
Although 13 umbee may keep you entertained for a bit. .........
Reactions: Denon

suckerfish Not sure what's next. Probably just relax and enjoy for awhile.

Finally got it all setup the way I want. I ended up winning a contest on BRS and won an Apex el last month. It is a controller that gives me temp alerts on my phone. Apparently you can even buy an add on module to alert you if it detects a leak. Pretty neat stuff, but I just plan on using the temperature monitor which you can see the probe cable in the first picture to the right of the filter cup. On the last picture had to take the picture of the tank at night as I have so much light the glare kills the picture. Anyway enjoyed sharing my progress in the thread and if I make any changes, I'll try and update, but as for now I'm putting this one to bed. Thanks everyone for your help and advice along the way. 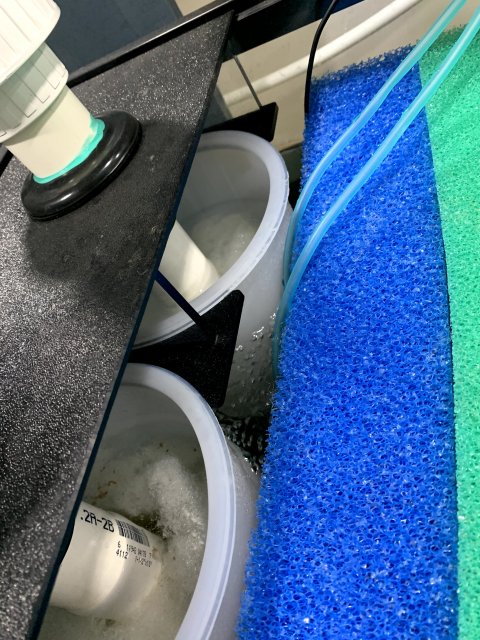 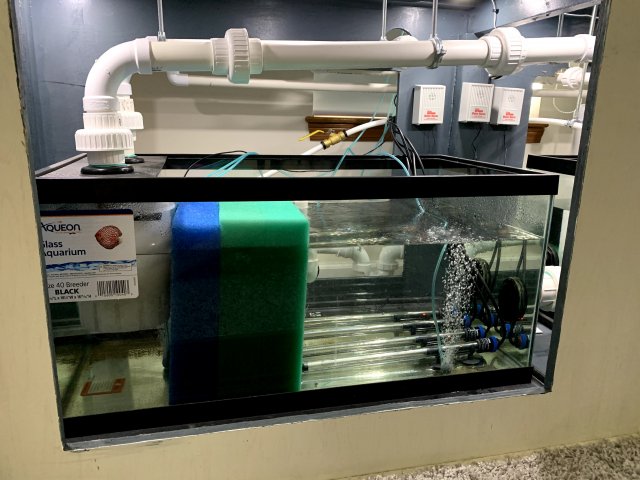 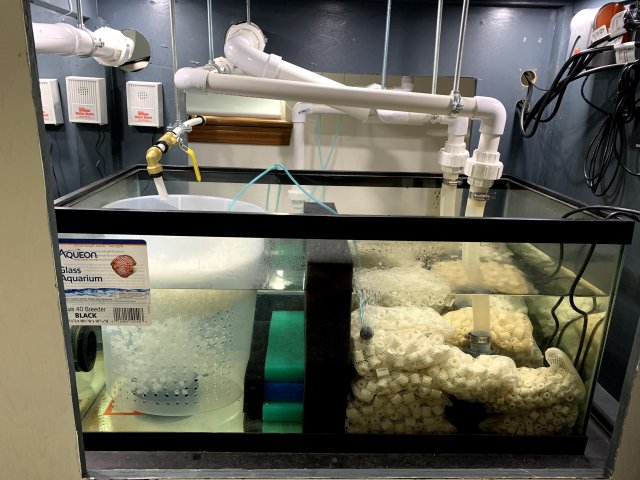 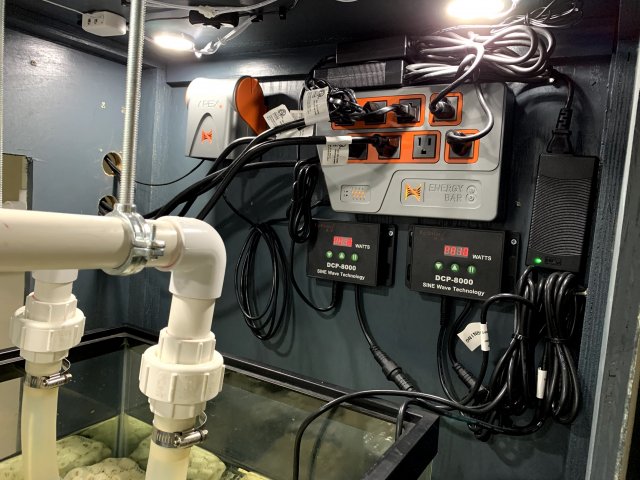 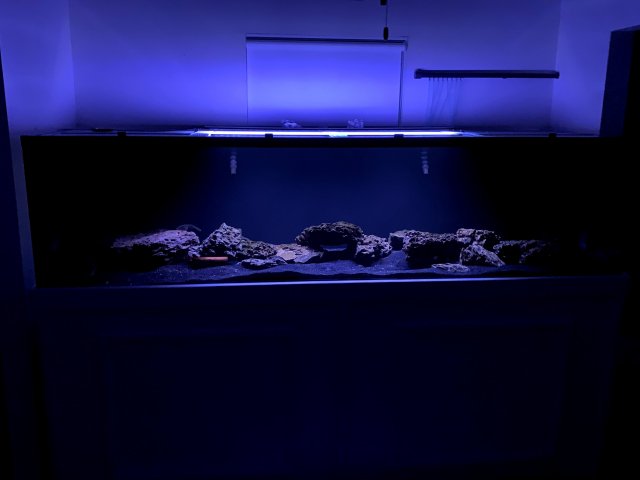 I need to sit down and play with my Apex controllers on my tanks. I got the Input/Output board so I could press a button and feed the fish, just can't get it to work.
Expand signature
~475G Plywood Build

TexasMFK31 said:
I need to sit down and play with my Apex controllers on my tanks. I got the Input/Output board so I could press a button and feed the fish, just can't get it to work.
Click to expand...

Not sure, I tried the feeding mode awhile back and it shut the pumps down for 5 min and then fired them back up. I didn’t have to do any config other than set the outlets as pumps in the configuration so not sure why yours isn’t working? It looked like it just killed power to the outlets. I did the advanced setup on my heaters and they seem to be working well too. Finally I setup an alert that if the temp was over or under my desired range it would send me an alert In the app, which in my mind is the most important one.

jake37 said:
Where did you buy the white pales with holes for the input to the sump? Also how did you fill the tank to get the sump to the correct level? I can't remember if your sump is below the tank or the basement below. The reason for the question is I'm thinking of placing my sump in the basement so it won't be visible when i fill the tank. In my case I will add a hole near the top of the sump to drain water (for a drip system); still it would be good to have a means to fill the tank to the correct level? Or perhaps just fill the sump then fill the thank?
Click to expand...

Those are called filter media cups and I got them on eBay from a seller that goes by the name of: filtermediacup. Original name lol… They work really well and sure beat cleaning socks. I just trash my polyester fill after a couple of days and throw in new. At $13 for a huge bag of it at Walmart it’s hard to beat.

My sump is under my tank. I fill from my sump and turn one pump on to keep up with the water flow, when the tank up top is full and starts overflowing back down to the sump then I fill to my desired water height in the sump which is dictated by the noise of the overflow and how long it takes to get the siphon going. The first time you fill it you will no doubt need someone at both the tank and sump to if nothing else check for leaks and make sure everything is flowing as it should. Good luck.
Reactions: jake37
You must log in or register to reply here.
Share:
Facebook Twitter Reddit Pinterest Tumblr WhatsApp Email Link
Top Bottom