Have had my Dovii pair for over 3-4 years now. I know them pretty damn well. The tank is in my bedroom so I virtually see them all the time.

I have finally came to the conclusion that they are just **** parents, I'm so damn frustrated. I know it's always mostly the owners fault but I have tried just about everything to get one of them picture perfect quintessential massive successful spawns.

I know and understand they are a hard fish to keep, but seriously it should not be this hard.

The male has no idea. He was brought up in an African tank where he was picked on and lost some permanent fin damage when he was a juvenile till about 5 inches. I bought him on an ad. Gave him his own 4x2 and grew him out. He was always shy and paranoid, not a monster at all, fair enough he'll eventually grow out of it, 6 months later I found him a female that was advertised as a male, she was in good conditioned and looked beautiful. She has abit more spunk but I was happy there supposedly not related.

I conditioned them and introduced them. Straightaway there was a liking and a bond formed. They spawned though little but awesome, now perhaps this is where I went wrong? I removed the eggs and hatched them, 80% survived and I was stoked.

Every spawn after that has just been miserable. Fast forward and I now have them in a 6x2 180 gallon tank all to them self, I have a bean animal over flow, 3ft sump with a 5000lph return pump giving me x7 turnover. Once they grow bigger I am 110% sure I am getting a bigger tank, I have my eyes on a 12x3 which has my name all over it but in due time.

I am an absolute nazi when it comes to water quality, I test it before and after every water change which is done every 2 weeks. I even use a bloody laser to test the temp. They are literally floating on air. Damn it's close enough to holy water and I would just about drink the water if I didn't know what I feed them.

There diet has had no exspense spared. Hikari gold as staple supplemented with carni sticks, algae wafers, frozen cichlid food, prawns, bugs and once a month live convicts or live yabbies (crayfish). If they are not happy with that I will fight both of them right here, right now and send them packing.

So now they are getting big. The male is pushing about 12" and the female approx 5" you guys can do the math, I have never officially measured them. Ok so these last few years has been so damn frustrating.

It's like a bloody marriage. They were once like teenagers I love, always together and what but as they have matured and I suppose tied the knot now She doesn't put out so he beats the hell out of her and then I have to divide and give them marriage counselling. Few weeks go by and they are all good again. I have even tried to spawn them through the divider to no avail. They are like bragelelina, picture perfect couple but a lot **** goes on behind closed doors. Don't quote me on that.

Now to the spawns, I have let them naturally spawn and egg amount has always been measley to say the least, the amount she can get to survive is almost guilty of child murder charges, I am no Dovii but I am a damn better mother then she will EVER be. I thought she would get better, I was wrong. She always chooses a bad spot, can not for the life of her lay in a nice neat patch, DOES NOT clean white eggs with fungus and sometimes eats the whole lot for ****s and giggles which proceeds in an ass whooping by the husband. Every spawn gets harder and harder to make sure no one gets hurt.

I am literally so destroyed and fustrated, broke. They are like my room mates, I put up with their ****. But now they are killing my kids. As I type this am watching her fan 90% white fungus eggs which is just damn heartbreaking.

I prayed they would become better but I have now accepted the fact they are just duds. I'm from Australia and my guess is once upon a time ONE pair of Dovii where smuggled in. Since then the only Dovii we have here are ALL related somewhere down the line and many traits have been lost along the way. Colour, tempermant, innate behaviour, genes and what not. Pretty much the quintessential Dovii. Lost forever. Don't get me wrong there is still some out there here in AUS which are bloody magnificent but compared to the f0 and f1's I see online out there its just embarrassing to say they least. It happened to Red Devils, green terrors, jack Dempsey and a lot more fish. Rare to see any of them over here head bang glass. The true fish has been lost in time.

I don't know what to do guys, I am broken. What am I suppose to do now?

I am so damn close to jumping in that tank and showing them how to pick off white eggs with my mouth then strangle them both because it couldn't be that hard.

Please help me, I just want a big successful spawn, tell me what I need to hear.

Tldr - Australian guy has had it up to here with his Dovii, gives them the world, they refuse to reciprocate. Bad parents or bad owner, you decide.

Edit - I cbf with spelling errors, to damn fustrated right now, would rather chew on a bullet.

Edit - here's a ****ty photo of the Dovii bragelina in question taken with a potato. 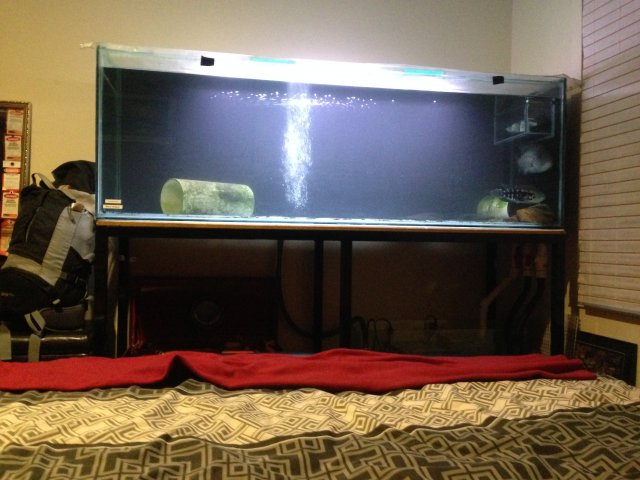 Are they still together?

detto said:
Are they still together?
Click to expand...

Reading the first post and I'm all like "man, it would suck to be this guy" then I read 'yabbies' and was all like "Aussie Aussie Aussie!" lol

If you don't mind me asking, where abouts in Aus are you?
Expand signature
"With regards to animal welfare the question is not can they speak, nor is it can they reason. The question to ask is can they suffer?" - Jeremy Bentham.

To be real honest....you are lucky to be able keeping that female alive for that long. Dovii males tend to kill everything they can bite.....aquariums are just not big enough for them.

Did you do research into water parameters? What's pH in their natural environment? What about KH, GH, conductivity? Tried measuring and altering your water to get it as natural as possible? Some fry do better over a bare bottom, other over a fine layer of sand?

Write down your findings....what worked, what didn't and take it from there. There is no magical guide into breeding. What works for me doesn't have to work for you (or actually your fish ).
Expand signature
My dutch website with over 2.000 pages about aquariums, fish, species profiles etc: www.aquainfo.nl
Working on translating the articles in English: www.aquainfo.org

To me the tank is too sparsely decorated, and needs more sight breaks to help them feel comfortable, and maybe even to hide from you in (more than just one piece of PVC). Some overhanging plants might also help, like the places they lurk in nature.
Many cichlids need to feel secure or they get too nervous to the job done.
If nervous they rather eat their own eggs and fry before letting them fall prey to something else (real or imagined). Especially large species like dovii, that in nature, is under tremendous pressure from predators like birds, reptiles, and humans. Yours seem to be quite shy, and are trying to hide in the corner in the pic.
tomojsg's suggestion about dimming the lights and soft music isn't that far fetched.
Reactions: bobblehead27
You must log in or register to reply here.
Share:
Facebook Twitter Reddit Pinterest Tumblr WhatsApp Email Link
Top Bottom