So guys we tried to find a girlfriend or at least just a friend to make our male kribensis, Trips, happy or at least give him some company so we got a little kribensis for him because he used to get picked on. We got him a friend and named (her we found out) Tracks. Now when we put her in there, she was displaying what seemed to be extremely aggressive behavior and all of trips color was washed out and she was super bright and would follow him around flaring up and I thought he was being, for lack of better terms, abused, by what I though must be a male due to the aggression I saw. Well it turns out she was claiming him. They both finally got their color back and we noticed she got really big and they kept sticking together in the skull they had or the tetra min flakes container we have sunk in the tank. Mind you, they are in a tank with 2 blue gill, 1 peacock, 3 mbuna, 1 rainbow shark 1 fenestratum And Apple snails which I'm watching to make sure they don't go in the container. But anyway, i have been watching them and in the container is a wall full of probably 50 eggs, maybe more, and tracks has shrunk and her and trips are trying to murder all the other fish for swimming in their are. Sooooo, what the fuzz do we do??? They are kribensis so I don't think the fry, even at about an inch can survive with the rainbow shark(4-5") alone nevermind the mbuna. The peacock is cool with everyone, the blue gills just like food and the fenestratum is just dumb. He just sifts dirt all day or sits in the middle of the tank with his mouth slack. my peacock just lost a scale for being stupid and trying to see what was in the jar. Trips hunted him through the decorations to bite a single scale of him. Anyway, I want as much information from someone who preferably has done this before before they hatch. They dropped last night so we have till next Wednesday or Friday roughly. Tank is a 60ish bowfront. Current stock is listed except the BN pleco and the 4 2 inch Apple snails----nitrates 0, nitrates 0, kh ang gh are ridiculous far past 240 and 180. Poor city quality water. Switching to spring water soon. Ph is 7.5 lighting is full spectrum. It's being shared between two tanks until paycheck day lol 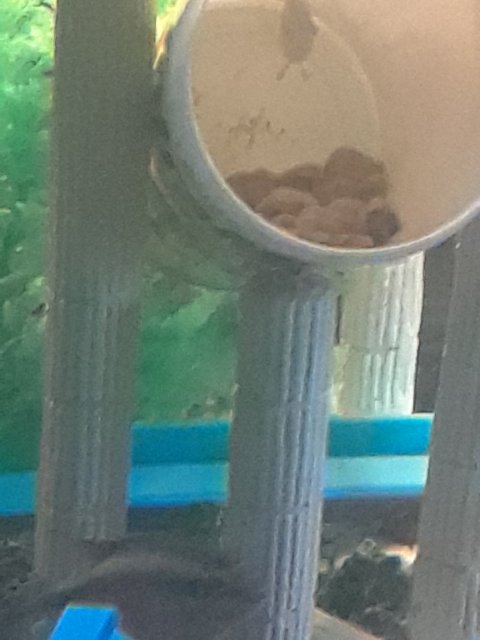 First of all, that stockist is absolutely wild.. why on earth are you pairing Mina I with none rift lake cichlids let alone bluegills?

As for the kribensis.. just let them do their thing. They're good parents and will guard the fry for quite a while. Mine used to bring up fry in a tank full of potential predators.

The blue gill weren't safe anywhere else and they are the biggest fish in the tank. They are just dumb and eat a lot though. I guess you could say we have very "Darwin" tanks lol. It's a hodge podge. We are just starting to set up. We are only 6 months in and 5 tanks. Smallest is the bowfront i think. My girlfriend has had the 75 for almost 3 years though. Look, I get that the combos of fish are ridonculous. That's kinda the point. My ideas are that the cichlids, being so evolutionarily adaptive, should be able to change, or adapt to things that they normally wouldn't be around. I hear they are very protective but with around 50 eggs, even if only half survive, we need to move them. At least with the bunas in there and the shark. They are all mean as heck.

Glad you are enjoying a batch. I used to have Kribensis when I was a kid. I liked them a lot.
Reactions: tlindsey

The stock list has dwindled, we have switched some up, were not sure what happened but all the eggs disappeared and they have been moved to safer waters to continue their ventures. They are currently in with a dojo, an upside down cat, and 2 female bettas, which mind their own business in the floating plants and some Cory cats
You must log in or register to reply here.
Share:
Facebook Twitter Reddit Pinterest Tumblr WhatsApp Email Link
Top Bottom