Hi. I want to share with you a fun flowerhorn story.

About 7-8 months ago, I bought what appeared to be a ZZ fader, which turned out to be male, and about a month ago, a ZZ female.
male: 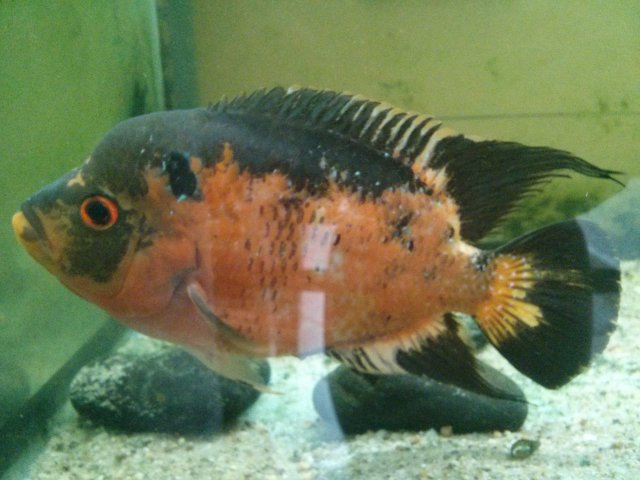 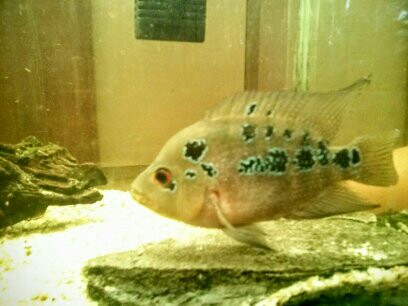 Actually, sexing the male was a bit of a challenge, since when I got him, I was told he was a female, and his hump was absent. I tried venting, but his vent looked more U-shaped than V-shaped. Keep in mind, this was my first flowerhorn. So I considered him to be a female, actually for nearly half a year, and actually was looking for a male for “her” (that would have ended nicely J), until I read about a method of sexing where you “squeeze” the fish.

Now the female, that is a different story. She had the black markings on her top fin, and about a couple of days after I got her, she laid eggs, alone. The vent was a solid U, and the “squeeze” method produced a clear “female” result. So I had something to compare my fader against.

I applied the “squeeze” method to my fader, which at the time I considered female, and the result was “male”.

I decided to take a little risk, and introduce the fish, in the hope to:

2: Maybe get 2 females that can live in the same tank.

I had been keeping them in different tanks, at around 28C, and feeding 46% protein food, with added mollusks and vegetables (frozen cichlid mix). I introduced them, first without a divider, but they were..not friendly, so I took the female out and introduced them with a divider a few days later.

Here they are, with a divider:

Later, after they stopped fighting through the divider, and the female dropped her breeding tube, I took it out. Here they are:


That was yesterday. A few hours after I took out the divider, they stopped eating, and begun searching for a nest, finally settling for the middle of the tank. The female started laying, but at first the male was eating the eggs.


Then, he stopped eating the eggs and started to fertilize them, as the female was laying.


When they were finished, they started to guard the nest, and to fan the eggs. It seem like they really get along.


Today, day 2, there are 6-8 white eggs, and they started eating, while still looking out for the nest. I also prepared another tank with aged water, just in case I would need to transfer some of the eggs (you know, if they start eating them).

How would you advise me to proceed from here? Thanks.

I had a similar experience with my male midas. I bought two Midas one with a prominant hump and one with not. I bought it from a guy who said it was a male and female. Well seems like they were both males and one with no hump paired with my red devil and wiped my tank out.

Usually I would say HUMP (KOK) will tell its male but vent is 100 percent. For me I don't really care I prefer males over females because when they breed the males tend to hurt and kill the females.


Your project looks very cool. I love both of them! You got a lot of Midas blood in the fader( That's why the fade the midas genetics).

Let them do their own thing. Let them get free swimmers and then take parents out. I never touch my fish until I see fry. I got 8 batches back to back with my red devil/ midas that way. Most died due to overflow and my filtration being too strong but I saved a few hundred lol

Also how big is your tank currently housed? How big are the fish approximately?
R

Ihsnshaik : Thanks for the answers The male is about 7 inches, and the female is about 5. The tank is a 35 gallon, and a have a ten gallon prepared for the fry.

Also, now entering day 3, a lot of the eggs on the glass floor have gone missing, but none are missing from those laid on the terracotta piece. Does anyone have any idea why? Could it be a sign that the parents have started eating the eggs, or are the eggs just not adhering to the glass as well as to the terracotta?
J

Rob Diaz said:
Do any of u have flowerhorn fry or fingerlings for sale Santa Ana area oc
area
Click to expand...