What is in my tank?! The Infamous "Common Pleco" Debacle

NOTICE: This article concerns the identity of a store bought 'Common Pleco', they need tanks greater than 100 Gallons and must have a diverse diet, good water quality, and plenty of personal space to be happy.

Hey guys, been a few years since last I posted but years of research I'm finally starting my path to becoming a proud keeper of truly Monstrous fish ! My journey into the practice of aquarium keeping started about 4 months ago when visiting my mother and younger brothers... my mother runs a Daycare and has 2 pugs, 8 cats, and to my surprise that day, a brand new fish tank given to my 6 year old brother as a gift... needless to say, being the only fish-hugger in the family, I ended up taking over care of that tank while I was there.

Didn't take long to realize that they had one fish in particular certainly didn't belong there... a Common Pleco. Purchased at about 1.5 inches long they had absolutely no idea just how big this beastly little Algae eater would get . When told that their cute little algae muncher would become an 18-24 inch long micro-behemoth they simply replied that they'd just toss him out when he got too big for the tank... ! That wasn't cool with me and so I flat up told em' that when that point comes he's leaving to come live with me, and so Pete the Plecostomus began the first steps toward his 2 hour journey to Hillsboro. Before he could come over I needed to set up his new home, and to my surprise my Grandmother had purchased an impressive 55 Gallon tank and gifted it to me for Christmas ! Eventually the tank was set-up and Pete, already at 3.9 inches in length, was finally ready to leave the minuscule 5 Gallon tank that he had been caged in for so long.

After a nerve racking trip through the snow and ice covered freeways of Oregon both Pete and I made it home safe and sound (my first time transporting a fish, so I personally held his transport case on my lap as I sat shotgun seat, lifting him over every bump and lump to reduce impact on his water). He's growing well and is really enjoying the space to swim and the freedom of darkness (seriously, my mom kept the tank lights on 24 seven, so on his first night home with me I made sure Pete got to see his very first Sunset & Sunrise ). He's already grown to 4.1 inches in length in the short time he's been here and I'm looking forward to seeing him get even bigger ! He loves to play "Sink the Leaves" on the artificial plants I got him and occasional he plays "Firefighter" on the air stone hose . However one day I began to realize that my adorable little Pete didn't really look anything like the species I believed he was (Common Suckermouth Pleco, Hypostomus plecostomus), and after studying his Dorsal Fin my suspensions were confirmed. Pete has 12 rays in his dorsal fin, far too many for a Common Suckermouth... so that then begs the question: what is he?

I've come across a few likely candidates but I can't seem to find a conclusive fit to Pete's uniquely beautiful color scheme. His most distinguishing features, to me at least, are the bright gold eyes, thin semi-transparent red colored fins, vermiculated belly pattern, and elegantly curved Caudal Fin. Here are some pics of him, sorry I don't have too many of him actually in the finished new tank, he only really comes out when the lights are off and my camera just isn't good enough to take good photos in low light situations . 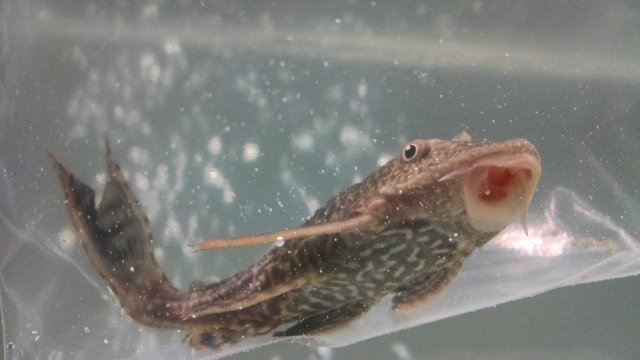 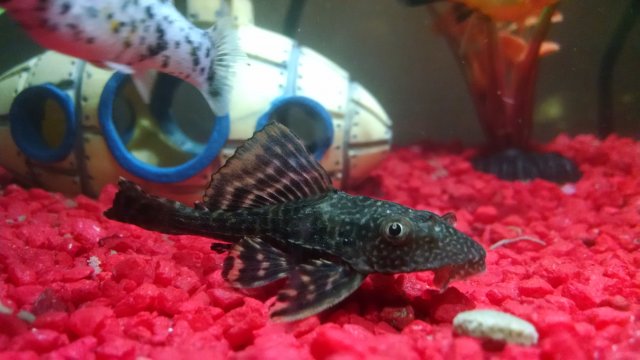 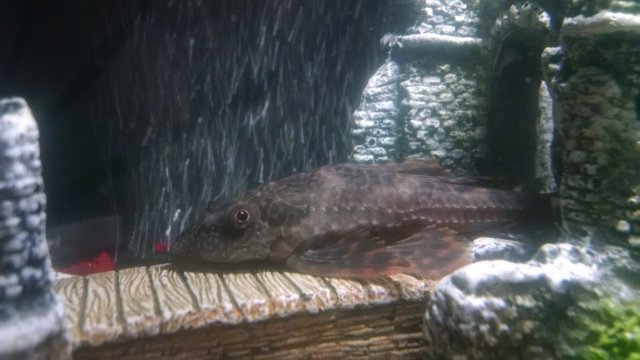 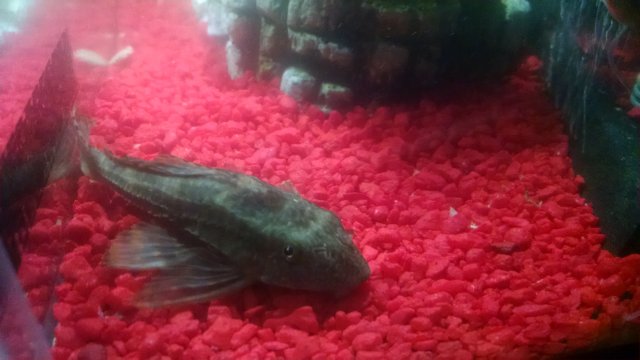 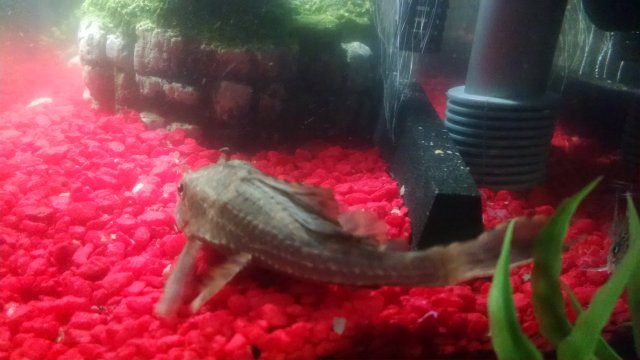 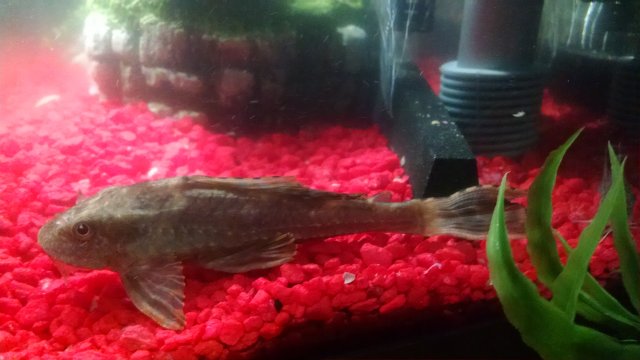 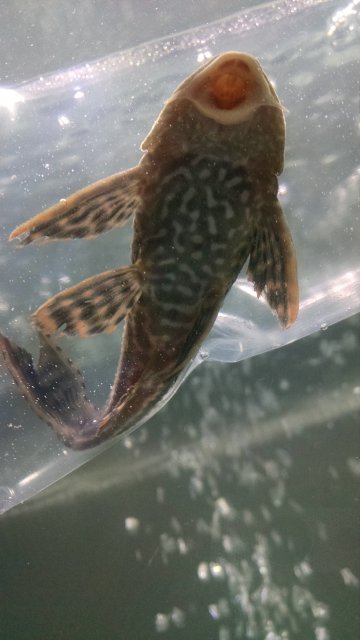 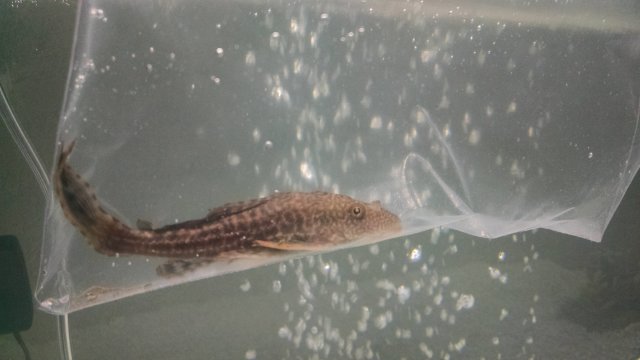 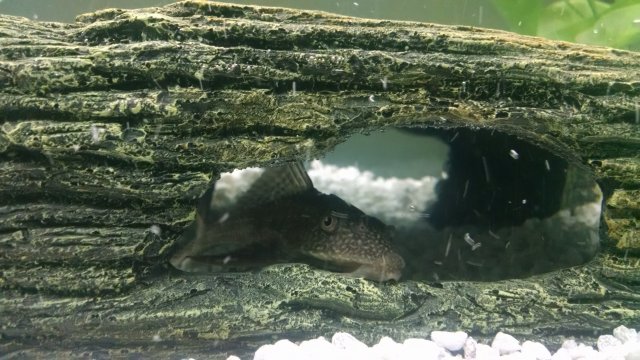 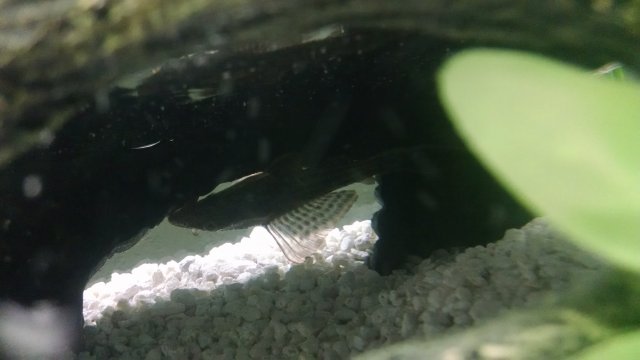 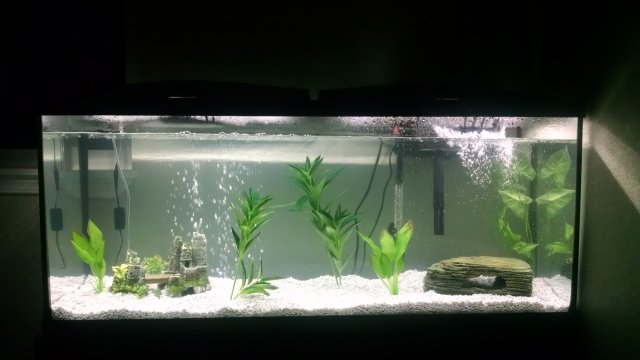 SUGGESTION: If the species you think Pete is hasn't been put up on the poll please comment, I will add it to the the poll, thanks !

NOTE: Pete will be getting an upgraded tank, 175 Gallon, when he's big enough for it. The 55 Gallon is mainly in use because it was an amazing surprise gift and Pete's situation in that 5 Gallon was growing beyond desperate as he absolutely need to get away from it.
You must log in or register to reply here.
Share:
Facebook Twitter Reddit Pinterest Tumblr WhatsApp Email Link
Top Bottom