Finally received my highly anticipated package from our import lord, Wes. Got two 3" wild Sp. Brokopondo and one 3.5" Rio Suriname C. Temensis. I actually broke my rule of not buying bass under 5" for these guys so I figured I'd use the opportunity to start a growout thread and track their growth and development. Especially because, upon looking for any pictures of Rio Suriname Temensis, other than some vague fishing pictures I couldnt find much. I know Aqua Imports brought some in a while back but all I could find on them were brief descriptions claiming they have more red that tends to be more intense and more spangling around their bars, sometimes even breaking their bars up slightly. I will add, the bars and lateral mark running down its side appear darker and more defined. Also, this Temensis' coloring looks to be a bit more mustard-y yellow compared to other Tem fry Ive had that looked more tan/yellow with gold spangling lightly around the bars. Other than that, no noticeable difference. Most bass I get are over 7" so it'll be fun getting to truly raise them from a very early age.

Currently I have them in a 55g growout with three C. Intermedia (two at 5", one at 3") and 4 growout geophagus and satanoperca. Filtration is at 425-475g per hour between the in-tank filter and HOB filter. Also added a sponge filter for added BB and drilled some holes in the lid to host Pothos for nitrate re-absorption.
PH in both of my tanks stays between 6.9 and 7.2. Nitrates are always kept below 10ppm, and temperature is at 82 degrees.

So far one Brokopondo and the Tem are already munching away on frozen mysis shrimp with the other brokopondo having a tougher time destressing and joining the other fish at the moment. Hopefully he adjusts and recovers soon as he does look a bit thin but I have the water lightly salted with the lights off and front covered to make it easy on them.

I'll try and update the thread about once a month to keep a consistent update going on their development. 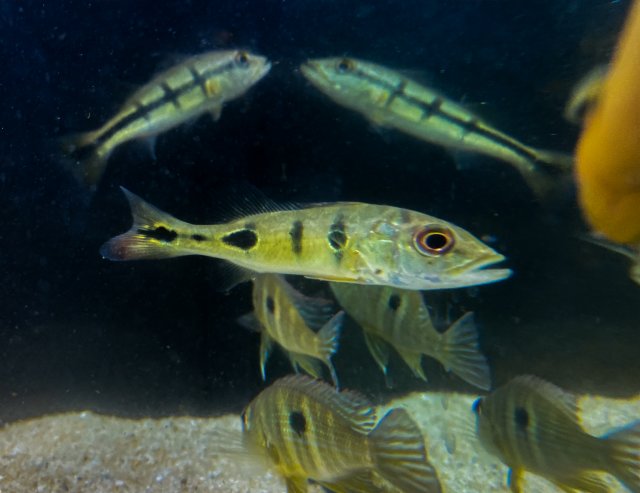 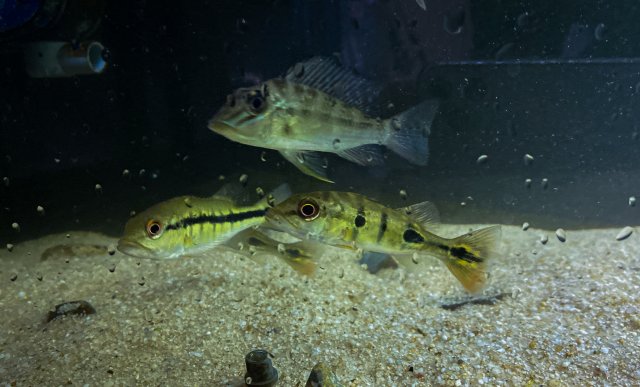 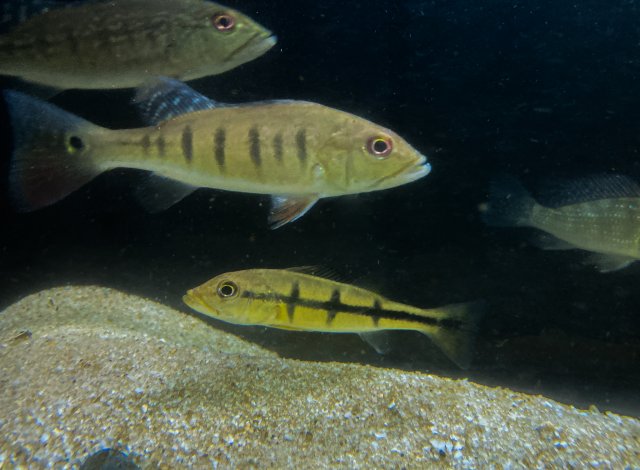 Already showing some nice colors.
I agree they look a little thin, but I’m sure you will fatten them up in no time.
Reactions: dr exum and Blakewater

BIG-G said:
Already showing some nice colors.
I agree they look a little thin, but I’m sure you will fatten them up in no time.
Click to expand...

Nice, I didn’t realize he currently had tems or I would have gotten some from him. It will probably turn out really nice with a more golden color over the usual grayish brown.
Reactions: dr exum and Blakewater

yzf450motoxrider said:
Nice, I didn’t realize he currently had tems or I would have gotten some from him. It will probably turn out really nice with a more golden color over the usual grayish brown.
Click to expand...

this is the picture I found, I was only able to locate it by looking for a rio suriname fishing guide and then looking through their catch photos. We'll see though, looks more like a Vazz to me 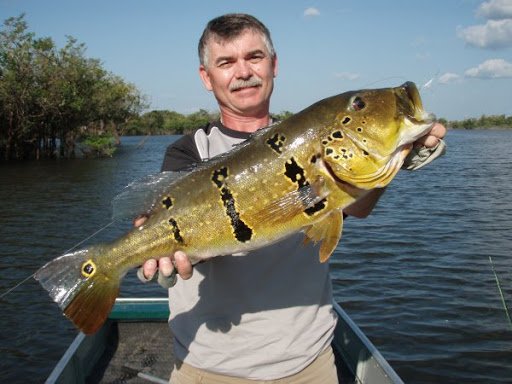 Blakewater It does look different from any tem I'v seen, looks nice though.
Reactions: Blakewater

Just a quick update. After the bass have settled in and I've been spending some time staring at them I realized his fins aren't just opaque showing the color of the background but are, in fact, solid black with some gold spangling/patterning near the bases. Very interested by that. The gold has also deepened to contrast it heavily. Considering a lot of the images I've seen of Suriname show muddy or blackwater, I'm wondering if this is a hint that as an adult he's going to develop a deeper, darker pattern. If so it'll contrast the deep reds they tend to show and look amazing. 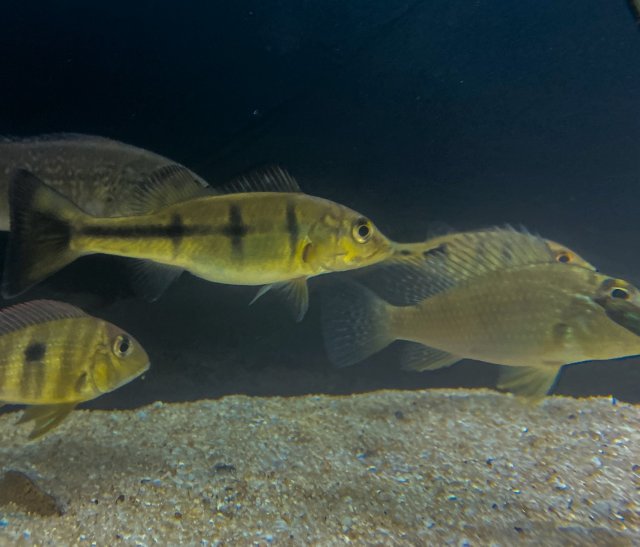 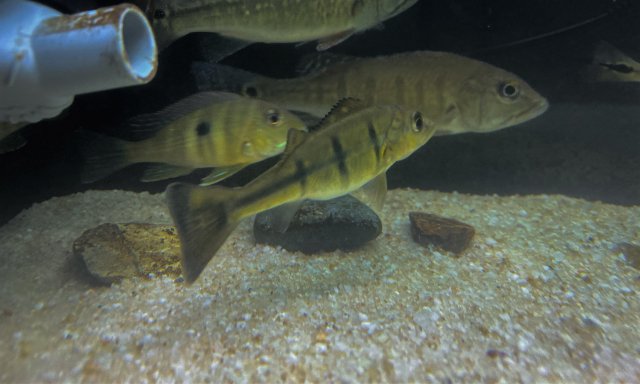 Quick Update, the Temensis is growing at a much faster rate than any of my other growoouts. He still has the sick looking black trim on all of his fins and his lateral bar has gotten much more dark and thick. He's probably gained another 50% of length and bulk since the last update. The Brokopondo's bars are beginning to develop as well and his color is getting deeper. Growth isn't as fast as the Temensis but his body is getting more solid for sure. Showing some good potential so far! Still eating 4 times a day of shrimp. So far they'll mouth pellets but won't fully except them yet. 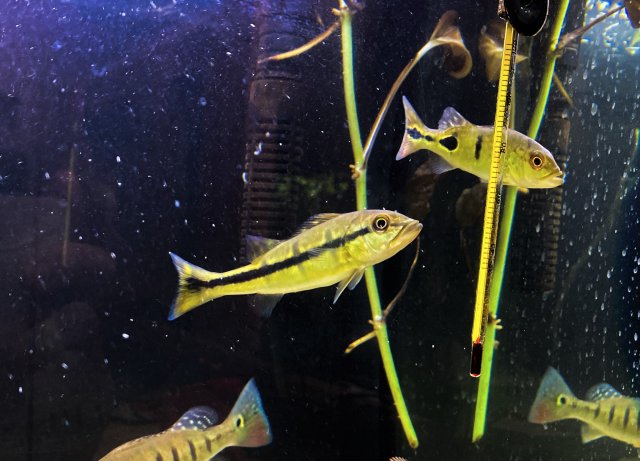 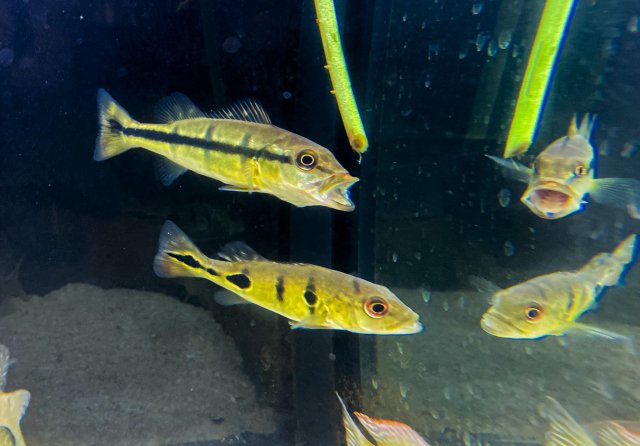 looking good! all from Wes?

is the little guy in the 1st pic the guys that passed?

super make me want a grow out group! just got everyone on pellets after months...

is this your first tem? i wonder what the captive size is? - maybe when i get my pond i’ll give it a thought.

i feel like i’ve not seen a lot other than Victor down in florida...