I do think the tank being at least 40ish cm deep does give them a sense of being in a pool. With changes in photoperiod, i.e. it is longer now, in addition to warmer water. Think they reckon spring loving is in the air.
Reactions: Zanzag

So sitting night before last a small rhinogobius swims past the front glass and I wonder why it is not growing. I see a second one behind a mound of rocks and realize these are babies. Somewhere along the line, they rhinogobius have bred.

I would not expect many to survive as there are more than 12 rhinogobius in a 75gal plus 7 aggressive predators. So seeing t
2 little ones at about 1" was awesome. I know they are babies as they have no color and are slightly smaller than my 3 smallest rhinogobius when I added them a few months ago.

I also saw a female with a really swollen belly and reckon she is very ready to make more.
Reactions: dan518 and Zanzag
B

I wouldn't be surprised to see a few make it, they can go places the bigger ones cannot. They can be very sneaky.

The fact they are there speaks well of the environment you have created.
Expand signature
No man is worthless. He can always be used as a bad example.
Reactions: Ogertron3000 and Zanzag

cockroach said:
Some updated shots. The Sicyopterus are proving nigh on impossible to catch to move to the river manifold rack. May have to tear donw the tank in the near future to catch them and then rescape and tweak.

Full tank shot. I had to add a surface skimmer as there was constantly a film on the water.
View attachment 1370161

Sicyopterus grazing. It is very interesting watching their mouths in action
View attachment 1370163

cockroach said:
Thanks. I have enjoyed watching it grow and mature. The largest horse mouth is becoming an absolute brute during feeding times. After a lot of observation this week I have come to realize he goes after to groups of fish in particular. One, he is savage in his chasing of the smaller horse mouth.
Two, he goes after the zaccos. I have come to deduce that this is due to their highly reflective flanks that cause his predatory instincts to kick in as he does not chase them relentlessly. Much like a small dog goes after a bird or squirrels until it flies away or goes up a tree.

Most of the day they all sit in a loose school in the current from the filter outlet.
View attachment 1372136

They hang out like this or slightly closer together.
View attachment 1372137

This pic does not clearly illustrate the size difference between the horse mouths.
View attachment 1372147

The algae growth on the stones and pebbles really sets it off as a true natural looking setup! Looks great.

This turned into a major unplanned update.
As the tank has grown, matured and settled, the fish have all set into a more or less peaceful existence. Even the shrimp seems more at ease than he used to but still does not to come out all the time. 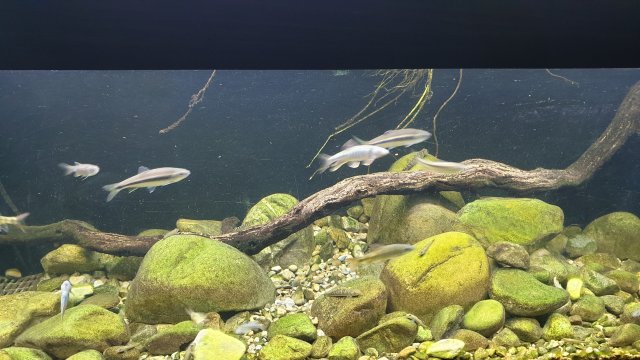 Horse Mouth
The two seem content and the chasing of the smaller one seems to have subsided as they near becoming equal in size and stature. Its not that the bigger one has stopped, nut more that the smaller one now stands his ground and seems less intimidated.
These two fish are the most skittish of the inhabitants and often set off the others. I am starting to feel the 75gal at 120cm (4')long may be too short for their bursts of speed. For calm swimming it is fine but when spooked the smash things. I will keep an eye on them to see what the plan will be for them long term. I am hoping to keep them. But their safety will be put first. 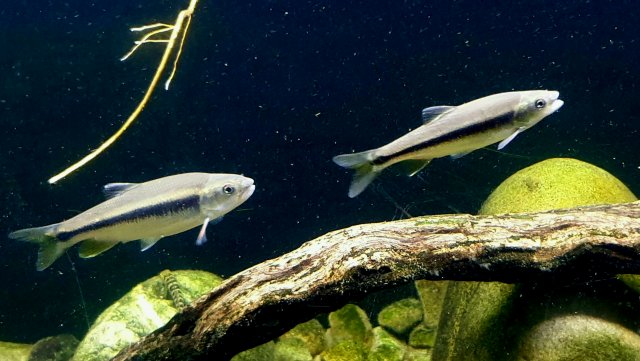 Zacco Platypus
The group is down to 3 now after a female killed herself during a water change. She darted full speed (an impressive burst) into a dead end cave and never moved again. This left 1 m 2 f. The male has grown very nicely and is catching the horse mouths in size and speed so a lot less harassment coming his way. The females growth rate has slowed considerably but they are also so fast! They keep themselves out of trouble and the trio breeds regularly. The females have highly reflective silver flanks and the male in breeding dress is smashing!
Not a single egg or fry has survived due to the number of rhinogobius and the Acrossocheilus. In their own tank, with a suitable set up I think breeding should not prove a hassle. 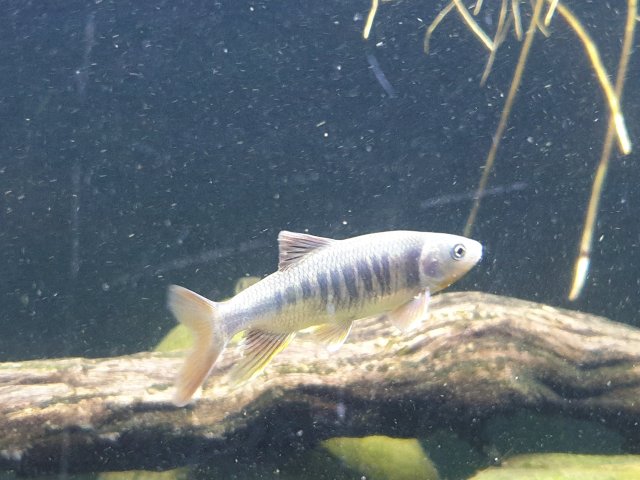 The largest Zacco Platypus I had. 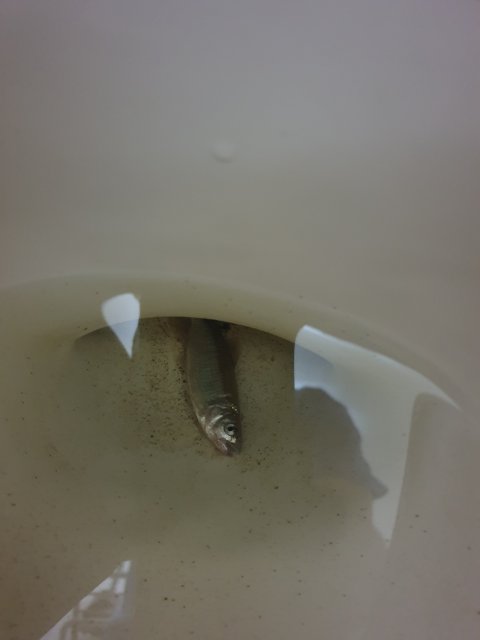 Acrossocheilus Parrallens
These are fast becoming some of my most liked fish. I love how their colors are deepening, their barbs are growing in corners of their mouths and how they are growing fast. They have caught up to the zacco's in size. These three, much like the other cyprinids in this tank are built for speed. But these fish seem to forage, and scavange, more than the aforementioned species. They go right inot the gravel bed and move it around if they have to in order to get to that morsel. They feed just as comfortably in the mid column and occasionally dart to the surface to get food.
They eat anything and everything which I have surmised gives them their good growth rate. They seem to enjoy each other's company more than the other mid water swimmers and even when observing them in the stream I have not seem them singularly. They become quite predatory when small feeder fish are added. They also seem to prefer the lower half portion of the tank and are less skittish than both the Zacco's and the Horse Mouths.
Acrossocheilus grazing fresh algae off a collected river rock. 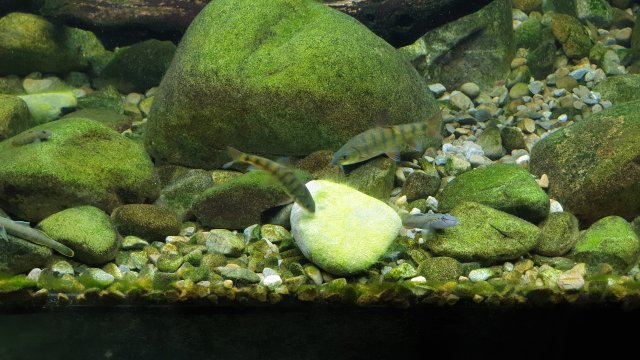 Rhinogobius Candidius
It is a wonder to me that these fish are not more popular in the hobby. I realize availability plays a role in this but they really are a fun fish to care for. They are bold, I have to shoo them away when cleaning as they are fearless (or at least know their limits and their ability to get away). I have noticed the group getting larger slowly as most of the fry I am sure get eaten. But the bottom of the tank, on the gravel and below decks, is littered with different sized rhinies. There are 3 dominant males that regularly make nests. These seem to change location from time to time. The females bounce around and the youngens appear to hang out in groups. They eat everything, and like a group of high school boys, make you feel like a chef when eating with such gusto.
They are incredibly predatory and it is a wonder any fry have survived. But the survival shows the importance of the rocky layout and large size gravel substrate. They are "territorial" in a loose sense of the word. They give a half-arsed chased and return to doing what they were doing almost immediately. They do enjoy the high flow areas of the tank but I have come to deduce that they do not need the high current and would do well in any tank of a suitable size.
One day I would love a larger tank dedicated to these great fish. 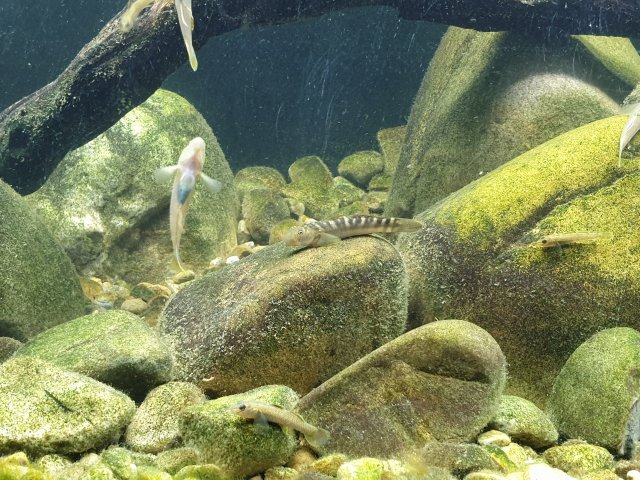 This guy hangs out here most of the time. 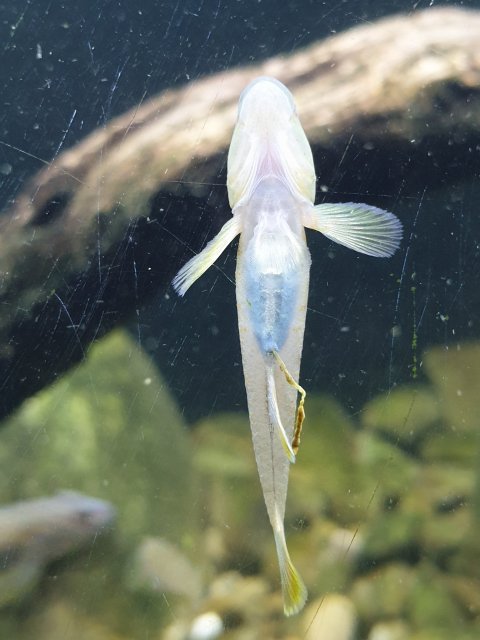 How I spot the rhiny nests. The gravel is clearly disturbed when the dig burrows. 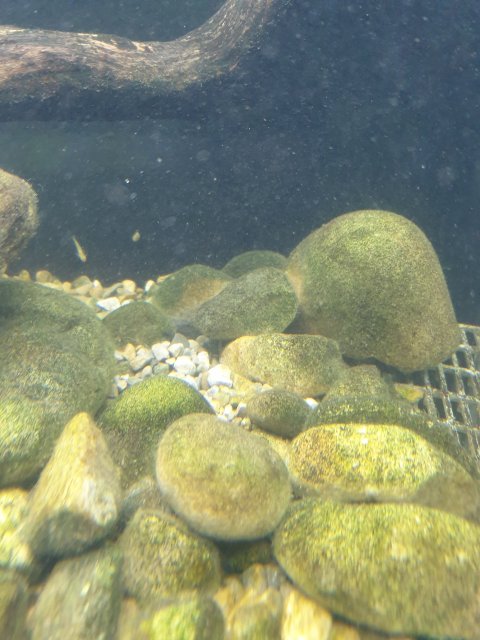 Sicyopterus Japonicus
These fish have really come into their own. Even though I had a group of 6 to start with, they seemed reclusive for the longest time. As the rhinies became larger and there were more of them, the Rock Mountain Gobies calmed down. They are almost exclusive grazers and do not chase after any kind of food, including bloodworms and frozen brine shrimp, as the stiphodon do. My set up has more than enough algae and aufwuchs to keep them going and this may result in a diminished desire to chase food. They are fat and happy at the moment.
What I have noticed with these fish is that they are highly territorial. Both with each other and the other benthic species regardless of size or gender. They maintain a semi set distance from each other and will chase other fish away from their chosen area.
I would like to move them to a tank with a high current but catching them is nigh on impossible. Even using a bait trap doesn't work as the rhinies are in and out cleaning up the bait before the S. Japonicus even know it's there. I want to remodel the tank and that may be the time I will remove them into one of the tanks on my rack system.
The rhinies keep the sicyopterus busy 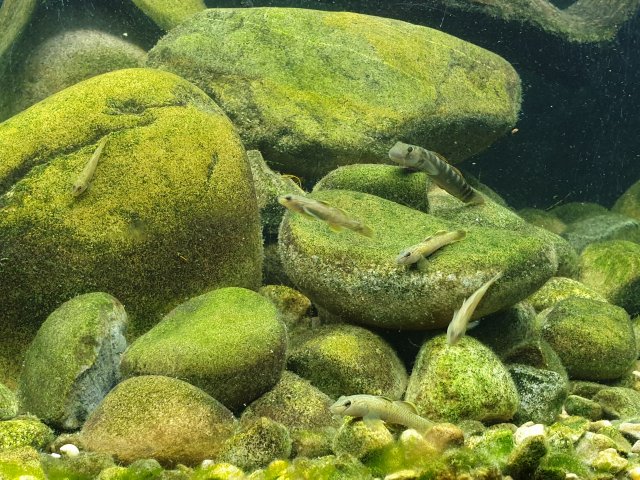 The Shrimp (Freshwater Prawn) - I suspect is Macrobrachium nipponense or something similar.
This little guy has "disappeared" a few times and seems to come back out of nowhere. It has grown considerably and I suspect it is a female as it has not developed the elongated claws characteristic of the males. It has had a claw ripped off, by the horse mouth i suspect, but it does look like it has grown back. With each molting the shrimp is getting darker and is starting to look like a battle tank with its armor.

The Future of the Tank
I am in the mood for doing a complete rescape. I know it will take a chunk of time so have not committed to it yet. I have a nice-ish piece of juniper I want to add to the tank and remove the current wood to use in the panda garra tank. The juniper has two branches to provide cover for the skittish fish.
When I take all rocks out I may try to move the powerheads to see how it affects the current in the tank. 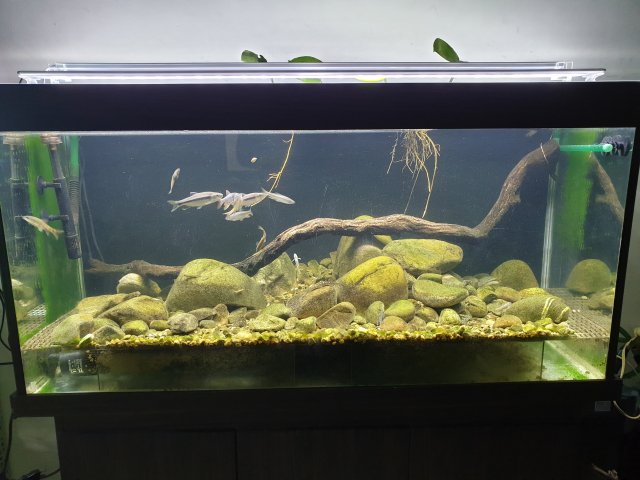 This is the stream normally. 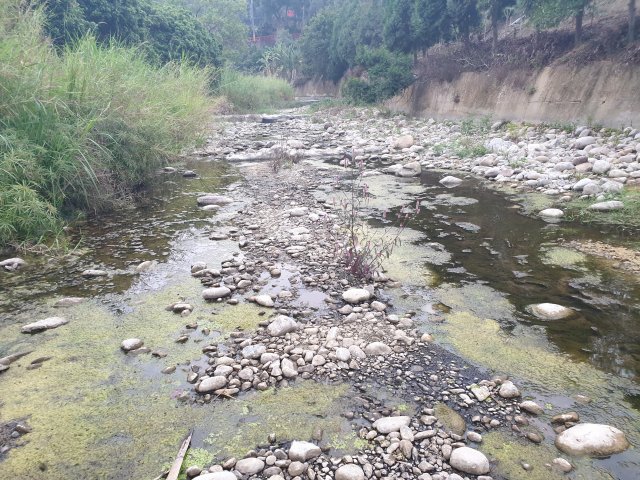 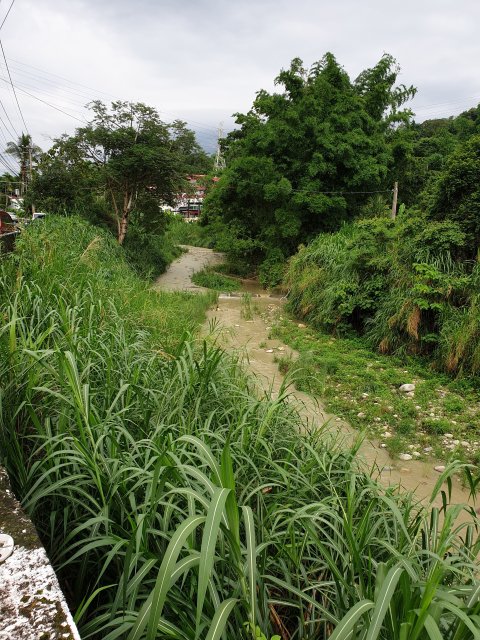 Here is the stream during/just after rain.
Light rain 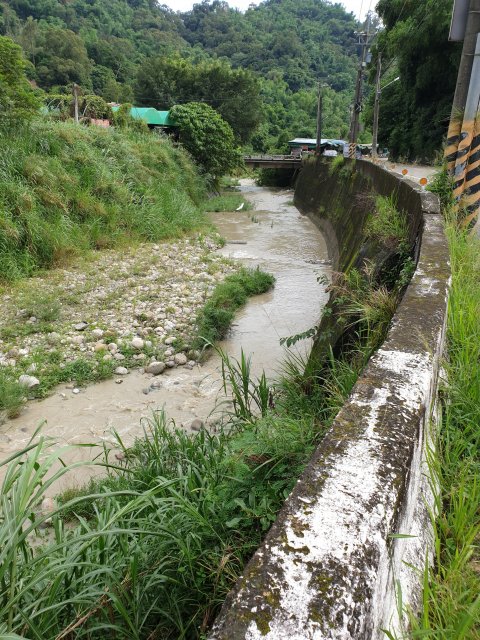 After a decent shower 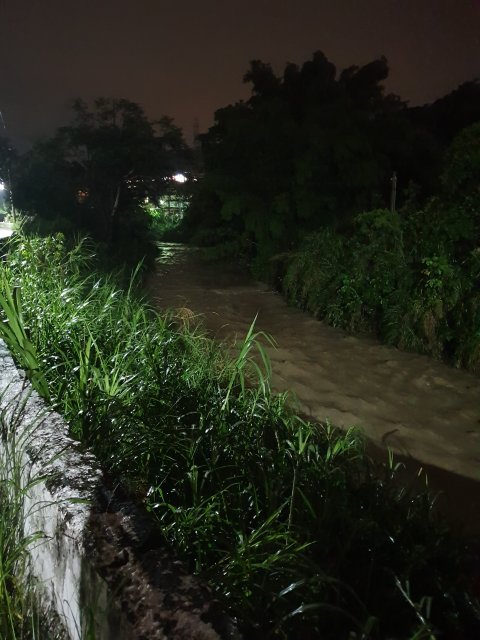 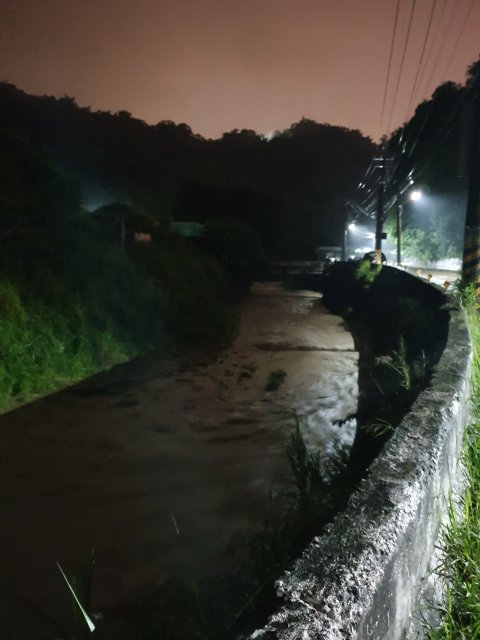 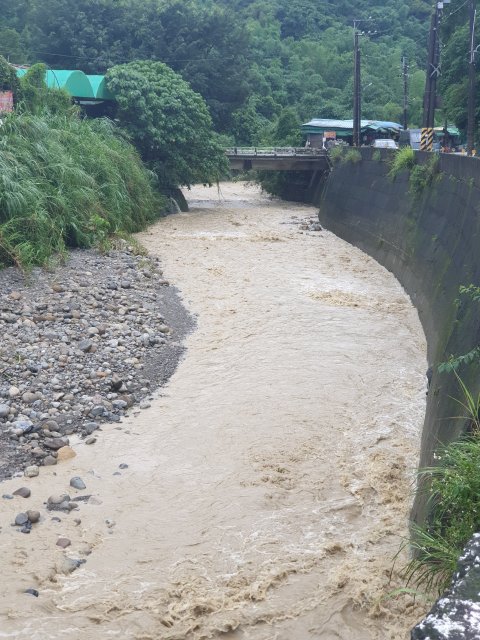 Here is the same stream during heavy rains. It is like this for a day or two then slowly retreats. 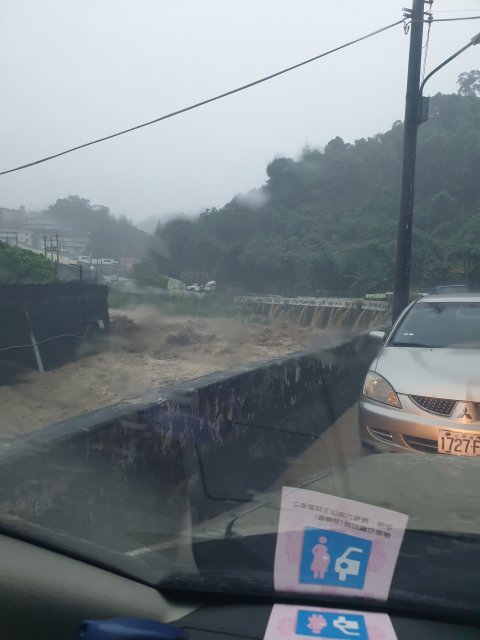 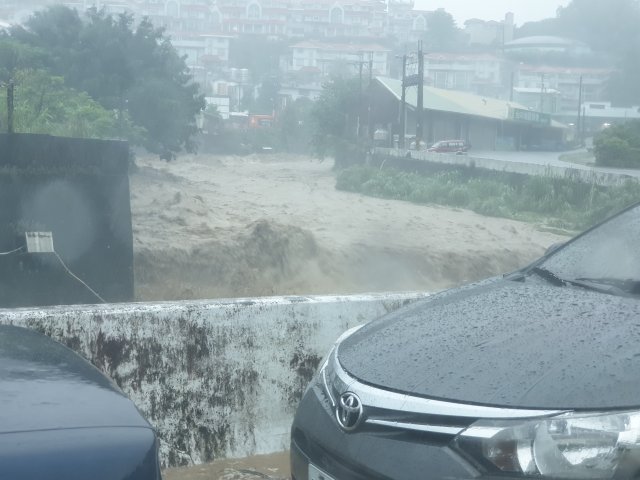 Here is is about 1.5m deep where it is usually about 20-30cm deep. If you stand near the river you can hear the boulders rolling along the bottom. 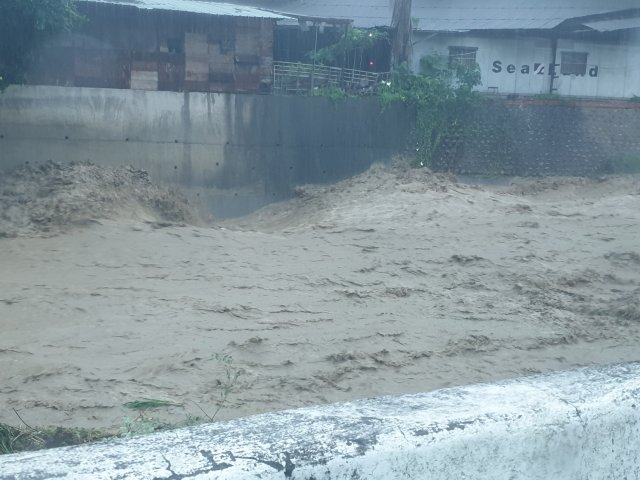 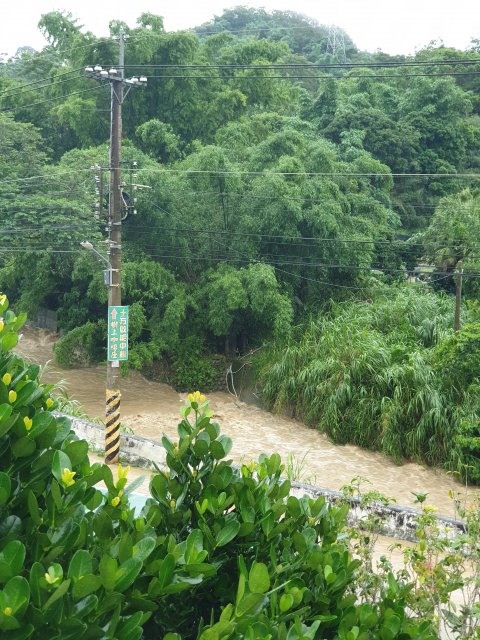 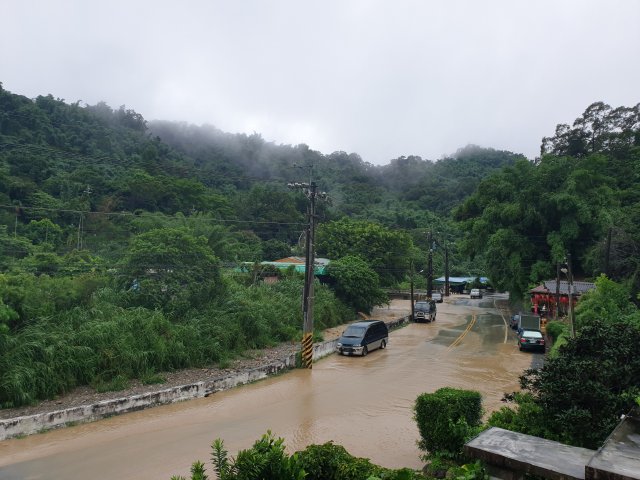 Don't know if I have posted the shrimp yet. maybe someone can ID it. This is what a male looks like.
He was returned right after the pics were taken to the exact spot I found him. 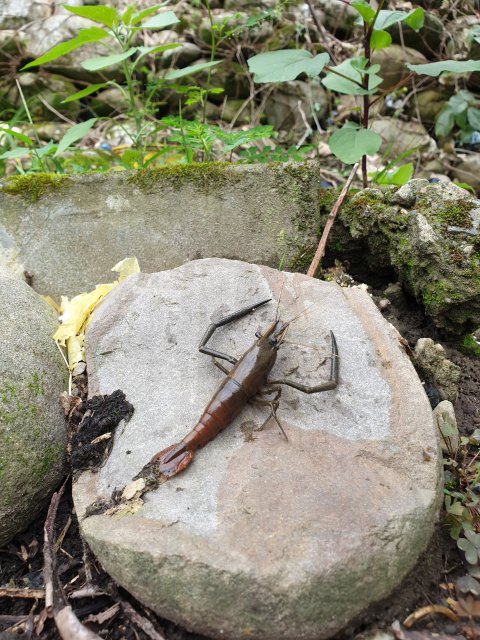