I have two baby oscars, both around 2" long. I got them a week ago. I am having trouble feeding them. I feed them in the mornign when i wake up, and the evening Usually when i go to bed, but not always that late.

I bought cichlid pellets that float at first, but after they sit in the water for some time, they'll absorb water and then sink. At first, they liked them, but they started ignoring them. Id see them look up at the pellets and just move on.

So then i tried feeding them these sinking goldfish pellets. They liked them. Swam right after them. But as time went by, they lost interest. They grab the pellet, and then spit it back out.

Then i tried tropical fish flakes. i crushed them up a bit so that theyd be edible size. The oscars ignored the flakes at first, but when the flakes began to sink, they went after them. But immediatiey spit them back out. And then grab the same exact flake, and again spit it out. Then they'd move onto a different flake, but the exact same thing happened.

I tried feeding them frozen blood worms, and they loved them. Absolutely attacked the frozen cube.

I don't want to have the blood worms to be the staple food. They're expensive. What do I do?
Reactions: Jexnell

Would cut back to daily feeding and instead of twice a day. If still disinterested then try every other day feeding. This helps to empty and be ready for another feeding.

kno4te said:
Would cut back to daily feeding and instead of twice a day. If still disinterested then try every other day feeding. This helps to empty and be ready for another feeding.

Usually cutting down to daily will suffice. Make sure water is clean. Poor water quality will curb a fish’s appetite.
Click to expand...

ok, I'll cut back on my feeding schedule. Should I still try what I feed them now or should I feed them something else?

Zak03 said:
ok, I'll cut back on my feeding schedule. Should I still try what I feed them now or should I feed them something else?
Click to expand...

I started my Oscar on Hikari floating pellets, but seemed to lose interest at times. So I tried Omega One and definitely prefers them. I feed the Texas Cichlid tankmate sinking pellets and the Oscar will also go after those although much smaller.

I would try Omega One personally, prices are good, readily available at Petco (Hikari is as well)

As far as floating vs. sinking, I guess that depends on the fish itself what they prefer. Floating food makes for a better show when they are hungry and nailing them at the surface, but the endgoal is getting them on a steady diet, so try both. Maybe buy a small bottle of both kinds and see which one they like.

Sometimes too much food can make them constipated and they wont eat until their GI tract is cleared out. Feeding shelled thawed peas will help clean them out if this is the case.

Avoid live foods, especially feeder fish. Worms, crickets, junebugs, they will eat them all, but it is a direct invitation to introducing bacteria they would not normally encounter so keep this in mind.
Reactions: Zak03 and tlindsey

I have 4 oscars of various ages. The smallest is a baby 1.2 inches when i acquired it almost a month ago. (Its grown since but i haven't measured yet) I feed the smallest 3-4 times a day and he is always egar to eat. I feed a variety of foods tho. My staple of choice is a gel food. I do offer pellets and he gets inverts for live foods. (Baby crickets, small worms, ghost shrimp)

I have a 6 month old who I fed this way and he always ate well. He's already 6 inches long so I slowed down on the ammount he's getting.

Ensure pristine water quality because poor water effects almost all aspects of a fish's behavior. The baby oscar I have is in 60 gallons by himself, water is tested daily, I change 10% 6 days and 90% once a week.
Reactions: Zak03, kno4te, tlindsey and 1 other person

I believe that part of thier issue is the tank is not cycled as per your other post. The fish won't eat as much or be very active in dirty water. All the baby Oscar's I have had have been eating machines. The fact that they are not eating everything as soon as it hits the water tells me something is up.

So basically you are doing a fish in cycle using your O's. Doing this you will want to do about 20% water change every day after doing a test. At first you will get an ammonia spike. This will drop off as the next stage of the cycle develops. Next you will see a spike in Nitrites. Finally both Ammo and Nitrites should lower down to zero with finally getting a Nitrates reading. That is when the tank will be "Cycled". The only significant way to remove Nitrates is via water change. This normally takes thirty days plus for the whole process starting from scratch such as you are. You can speed up the process by using "fresh" used substrate, using a "cycled" filter from a running tank. Big decor rocks/branches from established tanks. The beneficial bacteria lives on everything inside the tank not just in the filter. So moving these decor pieces from a running tank can quicken the time.
Reactions: astrocreep, Go_redfish, Zak03 and 1 other person

Thank you all for the help and advice. Keeping oscars is gonna much more work than i originally planned, but imma still keep my oscars and care for them correctly.
Reactions: astrocreep, Jexnell, Go_redfish and 1 other person

Zak03 said:
Thank you all for the help and advice. Keeping oscars is gonna much more work than i originally planned, but imma still keep my oscars and care for them correctly.
Click to expand...

Well when you put in the work you can expect a beautiful monster. 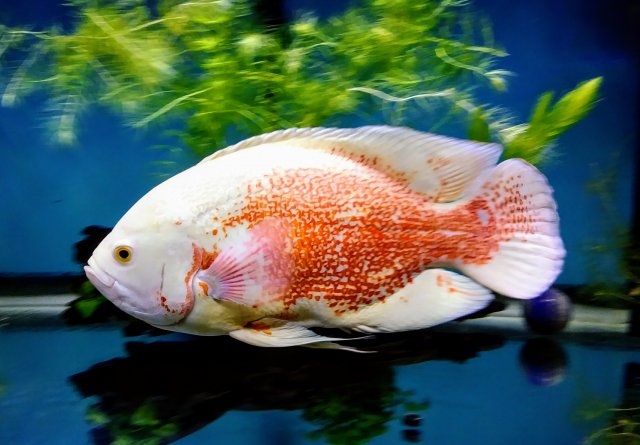 This is Toni. Raised by

Jexnell to 11.5 inches, now cared for by me. The hubby and I just measured her tonight by netting her against the glass. She is right at 12inches from tip to tip. Jexnell builds em big lol.
Reactions: ad88, Zak03 and Jexnell

This is the day I brought her home. 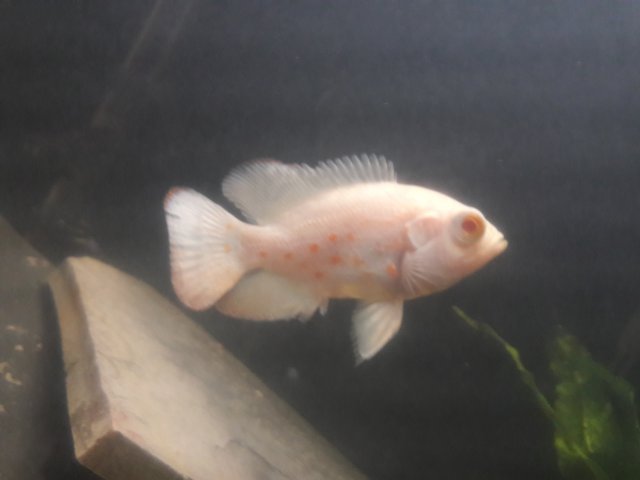 For the moment lets worry about getting yours thru this cycle. If you don't have a air pump on your tank I suggest getting one. Oscar's like highly oxygenated water. The more the surface of the water is agitated the more oxygen gets pulled into the water colum.
Temperature plays a role in the metabolism rate in fish. Different sites can have vastly different information. I keep my fish tanks at 75deg. To low and they become less active. Higher temps speeds them up and ATM we don't want that.
Your fish are still young give them hides where they can get out of site and rest. They then can come out when they are ready to. This will lower thier stress and help them. Floating plants real or fake can help them destress as well.

After reading jexnells post, I realized your tank had barely started cycling, and will be cycling for perhaps the next 5-7 weeks, a dangerous time for fish.
Until it has cycled, you need to be doing the daily 20% (I would do 50%) water changes jexnell suggested to dilute the toxic effects of ammonia produced by fish urine, other waste, and your tendency to over feed.
And as suggested, vacuum any uneaten food and feces up with each water change.
Unless you keep this regime up, the chances of your oscars and cat surviving the process may be quite small.
Sorry if that seems harsh, but I think you need to be prepared for the reality, not coddling.
Reactions: Zak03
You must log in or register to reply here.
Share:
Facebook Twitter Reddit Pinterest Tumblr WhatsApp Email Link
Top Bottom