I know, I know, these are very different fish that will never get along. Again, this is just hypothetical.

I just read a thread on cichlid crossbreeding, and it sounds like almost all Central American cichlids are genetically similar enough to produce offspring. This got me thinking, because I find Dovii fascinating but their large size and abundant aggression deters many (including myself) from getting them. I own a pair of convicts specifically because they are less aggressive than many other cichlids, are easy to care for, don't reach a large size, and are quite easy to breed. I pose this question: would it be possible to trick a Dovii into fertilizing convict eggs or vice-versa? I'm imagining potential scenarios in which robust dividers and pairs of each fish are used. If a person has a few pairs of convicts, there would almost always be a spawning female so the real trick would be getting her eggs close enough to a clutch of Dovii eggs that they are accidentally fertilized by the Dovii male. Given that this is hypothetical, I don't want to spend too much time theorizing on how it would be done.

Instead, I'm more curious at whether it's even possible and I'd like theories on what the potential offspring could be like.

I'd hope that some examples could be produced in which you get the strengths of both parents. The intelligence and personality of the Dovii. The calmer temperament of the convicts. The resulting fish would hopefully max out at a much smaller size than a Dovii. Both have quite interesting coloration, but having never attempted hybridization I'm not sure if anyone can predict the end result.

Of course, some offspring could end up just nasty monsters. The body size of a Dovii but lacking the keen intelligence, still possessing the predatory instincts. This could be a disastrous combination!
Reactions: Rid_Ether
J

Theres a few threads on here and one with pictures that I saw, pretty cool looking fish!
W

Really? I searched and found nothing, I'll have to take another look. If this is an actual thing I this might not be hypothetical anymore and I might have a new project.
J

I would take a screenshot of the picture but I dont think were allowed to post other peoples fish, even if we state it isnt ours, but could be wrong
J

anyone have pics? I couldnt find any

www.monsterfishkeepers.com
I found it, thanks! I'll have to do more research if I'm going to try to make this a thing. If I end up attempting this I'll be sure to post lots of notes.
Reactions: JakeT99
W

so i have a couple of doviixconvicts ranging from 3-4 inches. i just set up a 225g and have a ton of sa ca cichlids in it. i have a male and female salvini in there and i decided to throw one of my hybrids in. out of 11 fish to choose from including a gorgeous male my female salvini has now...

www.monsterfishkeepers.com
And here is the original post those pics came from. Sounds like they keep the Dovii's anger problems but want to breed like crazy from the con side. If this hybrid was released in the wild it would wreck any and all native species.
W

Talking about breeding Convicts made me want to check on mine, here mom and dad are keeping the fry in the cave. Sorry for the poor picture quality, I have new driftwood in the tank so pictures come out very yellow and they look a bit grainy after I fix the color. 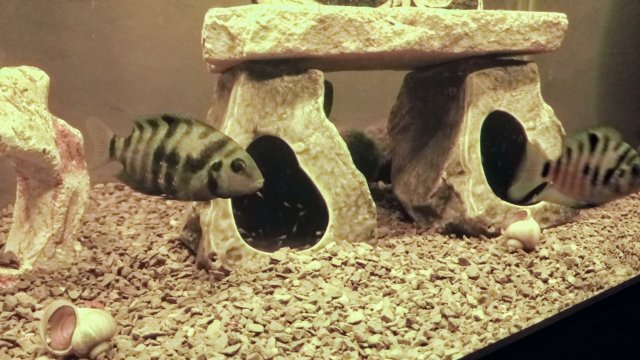 Hybrids never turn out how you imagine they will, always one fish genes always dominate and the offspring usually look like a goofy deformed version of one of the parents.
Saying that, always like seeing how they turn out, just don't think they should be released to the public. If you do it grow them for your own curiosity but don't sell or give any away would be my advice.
W

Well, I went ahead and attempted this with no success so far. I put a 5" male wolf in with my 3" female convict. For a while she totally dominated him but he eventually got comfortable with his new home. Now it's a good thing she has lots of hiding places because he's grown 2" and if she dares show her face it's anybody's guess whether he will do a dance for her or just relentlessly pursue her. She's going back to her convict male soon, it seems there is some potential from the wolf but she is only terrified, stressed, and the size difference is now enough that I seriously doubt she'd ever survive a prolonged interaction with him on a bad day. When he outgrows my tank I may try it again, perhaps when she gets big enough to be on an even playing field with a Dovii for more than a few weeks.
Reactions: Kaneh5150
You must log in or register to reply here.
Share:
Facebook Twitter Reddit Pinterest Tumblr WhatsApp Email Link
Top Bottom